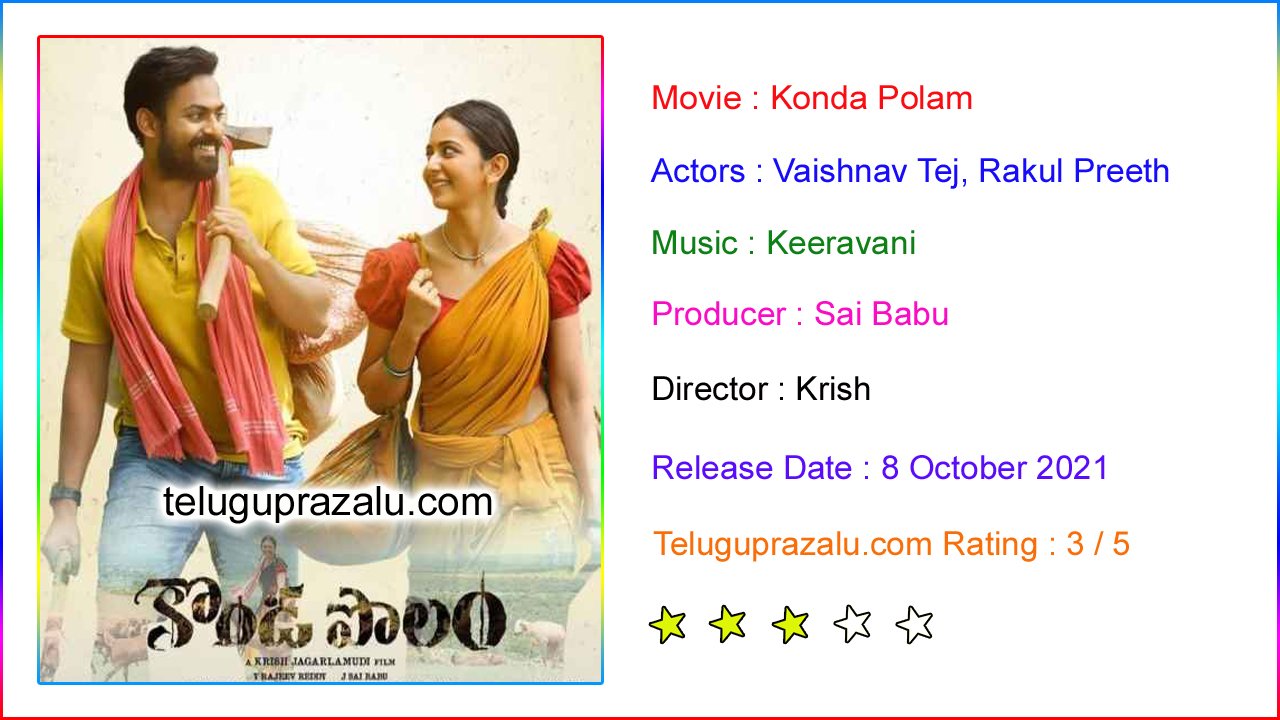 Vaishnav Tej and Rakul Preet Singh teamed up with director Krish for the rural adventurous drama, Konda Polam. The film is based on noted author Sannapureddy Venkataramireddy’s acclaimed book, Konda Polam. Shot entirely during the Covid second wave, Konda Polam has had its theatrical release today amid a lot of expectations. Let’s see how the film is.

During his IFS interview at the UPSC, New Delhi, Kataru Ravindra Yadav (Vaishnav Tej) narrates his journey on the chief interviewer’s (Nasser) insistence. Ravindra hails from a poor family in a village near Nallamala Forest in Kadapa. Ravindra’s father (Sai Chand) educates him by herding goats. But even after completing his engineering and pursuing software courses in Ameerpet, Ravindra fails to get a job in Hyderabad and returns to his village.

In unavoidable circumstances, Ravindra, his father, his childhood friend Obulamma (Rakul Preet), fellow villagers Ravi Prakash, Hema, Mahesh Vitta and others go into the Nallamala Forest to do Konda Polam. The forest is ruled by a tiger, and on the other hand, dreaded smugglers who cut off the precious Bommakarra trees also pose a threat to innocent villagers. The entire story is about how a meek and fearful Ravindra overcomes his fears and becomes an IFS officer.

Vaishnav Tej’s performance as a struggling engineering graduate who rediscovers his confidence and goes on to become an IFS officer is impressive. He displays earnestness and sincerity in his performance. He, however, must work on his flat dialogue delivery and expressions in emotional scenes.

Rakul Preet is a revelation in the role of a chirpy and spirited village belle named Obulamma. She portrayed a de-glam role by appearing in a dusky avatar. She looks like a village girl next door in half sarees. Even her performance was apt and aides the narrative.

Character artiste Ravi Prakash steals the show in a lengthy monologue where he speaks to his wife over the phone and breaks down after an emotional outburst. Senior character artiste Sai Chand, too, shows his calibre in a scene where he vents out his angst after failing to fetch a drop of water for his thirsty goats. It’s quite good to see the legendary Kota Srinivasa Rao in a rural character after a long time. Rest of the actors like Hema, Mahesh Vitta and others also had author-backed roles and their performances were adequate.

While Konda Polam’s basic premise is quite emotional and dramatic, the film takes a beating occasionally with some lackluster scenes. Too many scenes, even in the second half, showcasing the poor villagers’ plight and their bond with nature appear repetitive and slowdown the narrative.

Ravindra was initially shown to be frightened to an extent that he is shell-shocked and even fails to alert others when he sees a snake. However, within a few minutes, he overcomes all his fears and displays exemplary courage the moment he sees a tiger and smugglers. These scenes, which are crucial in Ravindra’s journey, appear too cinematic and unconvincing.

A couple of love songs featuring Vaishnav Tej and Rakul Preet, especially in the second half, were unnecessary and look totally out of sync with the kind of rustic and realistic story being told on the screen. Ravindra and his fellow villagers face certain adversities like a tiger on the prowl and the Bommakarra tree smugglers. However, these two main plot points were not used effectively.

Krish shines with his trademark taking in several scenes. He loaded many scenes with heartwarming emotions that showcase the plight of the villagers who rely on nature for their livelihoods. The rain sequence, the scenes where Ravindra attacks the tree smugglers and later rescues a lamb from the tiger were handled quite well by Krish.

Veteran composer MM Keeravani’s thumping background score is one of the major highlights of Konda Polam. Even a few montage songs, especially Rai Rai, Dham Dham Dham and Kadhalu Kadhaluga were quite impactful. But the romantic dance numbers don’t make much impact.

Gnana Sekhar’s cinematography explores the picturesque and virgin locales of Vikarabad Forest and Anantagiri Hills quite well. Several night action episodes were shot brilliantly with realistic lighting since there’s no scope for artificial lights in the middle of the forest.

Editing could have been sharper, as a few scenes depicting the villagers struggles and their bond with the nature appear redundant. Art Direction is spot on as it gets the milieu right. Dialogues too are laced with heavy emotions and deserve a special mention. The VFX on the tiger could have been more realistic since the tiger plays a key role in the journey of the protagonist and thus the film.

On the whole, Konda Polam is an impressive and emotional tale of a young village man’s (Vaishnav Tej) inspiring journey. Actors’ performances, Krish’s trademark realistic and emotional narrative are the main strengths of this rural adventurous drama. On the flip side, repetitive scenes and unnecessary commercial ingredients (love songs) dilute the otherwise earnest tale of village life to an extent. You may watch Konda Polam this weekend for its touching story, realistic backdrop, authentic performances and writing and overall technical finesse.