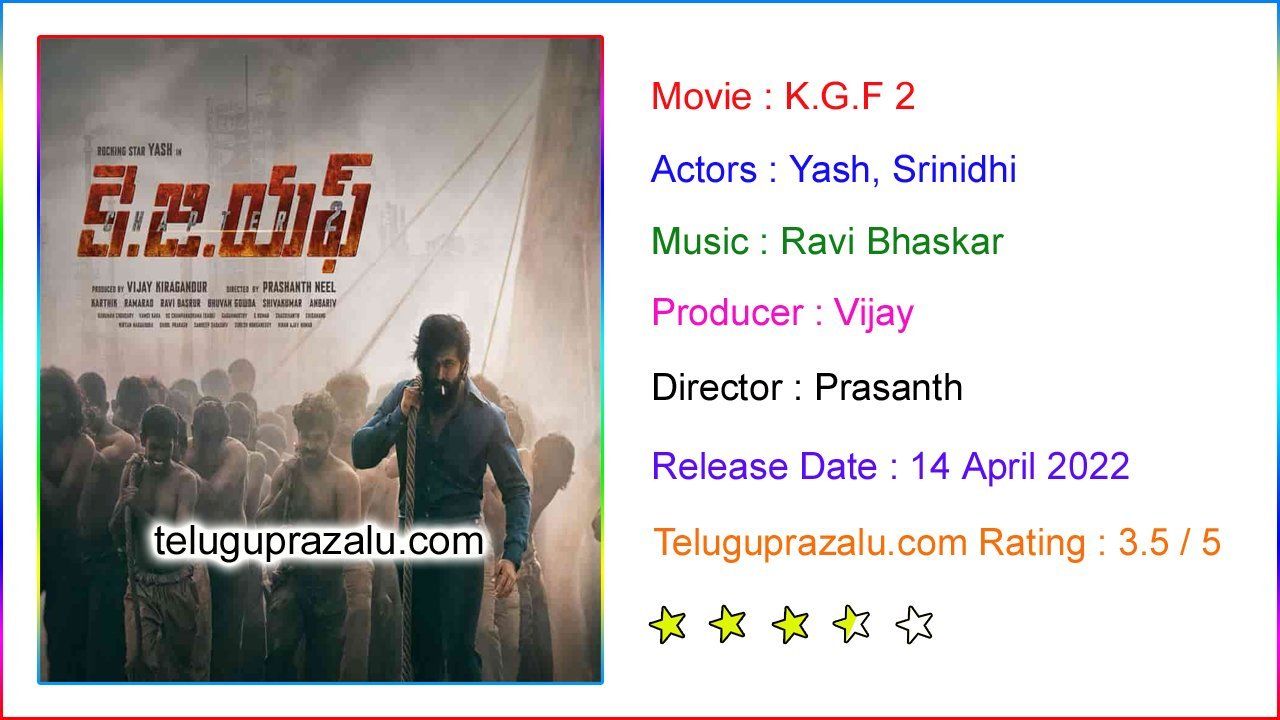 KGF is a film that created a sensation of sorts with its release. The chapter 2 has been released with a humongous hype all over today. Let’s see if the film lives up to the expectations or not.

KGF 2 starts where the first part ended. Rocky kills Garuda and takes over KGF. He becomes a super power in no time but obstacles come in the form of Adheera(Sanjay Dutt), the head of the Vikings clan. Rocky faces him head on and puts Adheera on the back step. This is also the time more problems get created for Rocky as the prime minister of India(Raveena Tandon) comes to know about Rocky’s power and orders for his downfall. The rest of the story is as to how Rocky faces Adheera and the political power and comes out victorious.

There was a lot of doubt whether Prashanth Neel would live up to the expectations created on KGF 2 and after watching the film, one can say that he has given the audience a lot to cheer about as the film is action packed with riveting mass moments.

KGF 2 is going to be Yash’s big ticket to stardom as he has given a mind blowing performance. His attitude, body language and laid back screen presence are just superb in the film. In the days to come, he will be a huge star in the country for sure. Heroine Srinidhi Shetty gets a good role in part 2 and does well.

The surprise package of the film is Raveena Tandon. After doing glamor roles for years together, she has showcased what she can do as an actress. She plays the key role in KGF2 and is authoritative with her performance. Rao Ramesh too gets a good role and elevates the proceedings with his dialogue delivery.

Sanjay Dutt as Adheera is menacing to say the least. There is some power when it comes to him playing negative roles and Dutt gives the film a right high with his negative role. The production design and BGM are top notch and give you multiple goosebumps moments in the second half.

The first half of KGF 2 is a bit lengthy. Though there are enough mass elevations, nothing much happens story wise as only the key characters get established.

The character of Rocky is hyped so much that one gets eager to see how he will be brought down. Though the way director Prashant Neel showcased the ending in a decent way, the clash between Rocky and Adheera looks a bit forced.

KGF2 has some of the best technical aspects in recent times. Right from the BGM to the camera work, every department excels in this film. Production design, the mining backdrop and the way camera work showcases these larger than life aspects is top notch.

Yash has been styled superbly and the action choreography and thrills give you multiple whistle worthy moments. The confrontation between Raveena Tandon and Yash is one of the best scenes in the film and leaves you with a high.

Editing is slow in the first half and the Telugu dubbing and dialogues are very good. The manner in which the narration elevates each department was amazing.

Coming to the director Prashant Neel, he has done an excellent job with the film. Looks like he knew exactly what the audience were looking for and delivered it to them as a package. With KGF 2, he will become one of the top directors in the country for sure.

The manner in which he showcased the character graph of Yash, elevated him in multiple areas and did not lose the emotions is the best part of his narration. The way he ends the character of Rocky is also impressive. KGF 2 has so many factors that will relate to the masses as Neel takes us to the world of KGF and entertains you completely.

On the whole, KGF 2 is a Paisa Vasool action entertainer that lives up to the hype and hysteria created. Though the first half is slow and the story looks familiar, Yash’s solid screen presence and able supporting cast of Sanjay Dutt and Raveena Tandon only enhance the proceedings. The masses will love the film and KGF 2 will surely break a few records at the box office and is an action drama that should not be missed. Go for it.