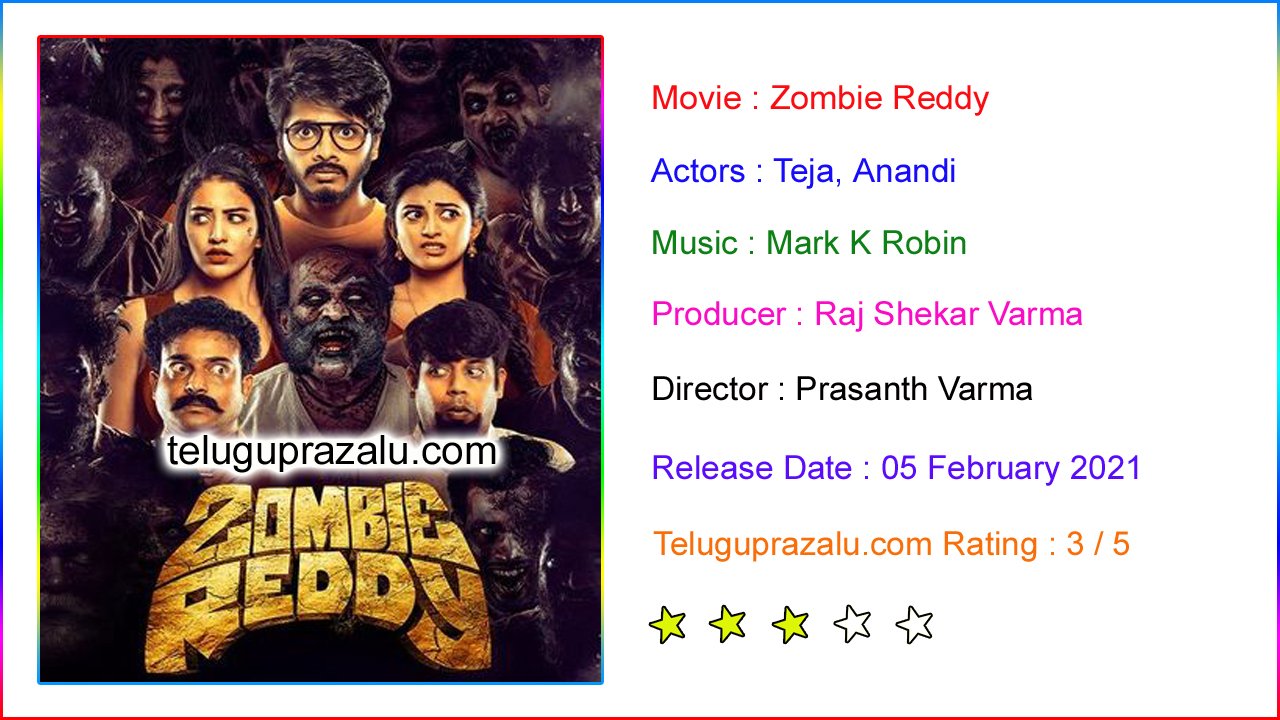 Zombie Reddy is a film that has created a good hype with its promos. Directed by Prashanth Varma, this film has hit the screens today. Let’s see how the film is.

Mario(Teja Sajja) is a game developer who has issues with his gaming software. His friend(RJ Hemanth) is the only option to fix it. To meet him, Mario along with his friends, heads to a small town in Kurnool. On the way, Mario’s friend gets bitten by a crazy guy. This leads to everyone in the village getting affected and slowly they start becoming zombies. How will Mario come out of this deadly situation forms the rest of the story.

The story idea of the film is good and one should appreciate the director Prashanth Varma for bringing the zombie concept and placing it in the Seema backdrop. This itself makes things interesting. Prashanth does not go overboard and makes the film quite simple and easy for everyone to understand. There is comedy, thrill, and emotion in equal doses.

Teja Sajja plays the main lead and he is quite impressive in his debut film. The young actor has good screen presence and also carries the serious emotions and action part quite well. Heroine Anandi gets a good role and she is very impressive. Her looks, and the twist in her role was performed well by the actress. Mirchi Hemanth is good in his lengthy role and evokes decent fun.

The second half is where the actual fun begins. The zombie concept is brought in full flow without missing any logic. Getup Sreenu needs a special mention as his comedy keeps the audience engaged and the young comedian does really well. Daksha Nagarkar is also good in her role. The two actors who played faction leaders have also done a very good job.

The camera work needs a special mention and so do the art department and make up guys. Creating zombies is not an easy job and with limited budget, the output of makeup and visuals are very good. 30 years Prudhvi is also good in his role. The supporting cast have done well in the film.

One of the drawbacks of the film is the slow first half. The director does not highlight the zombie concept and concentrates on the faction part in the village. Too many scenes and time are wasted. Because all this happens, the director is left with no choice but to pack the pre interval and interval with sudden rage of zombie events. This looks a bit rushed.

As said earlier, the film is super strong with its technical aspects. The BGM is impressive and so was the production design. The dialogues are funny and screenplay is impressive in the second half.

Coming to the director Prashanth Varma, he has done a decent job after his flop fiom Kalki. He chooses a very good concept and keeps the proceedings simple and engaging. He adds good comedy and thrills to end the second half in a decent manner.

On the whole, Zombie Reddy is a time pass masala film that has a very good premise. Decent comedy, enagaing thrills, and taut second half are basic assets. If you ignore the slow first half and some over the top scenes here and there, this film ends as a decent watch this weekend.