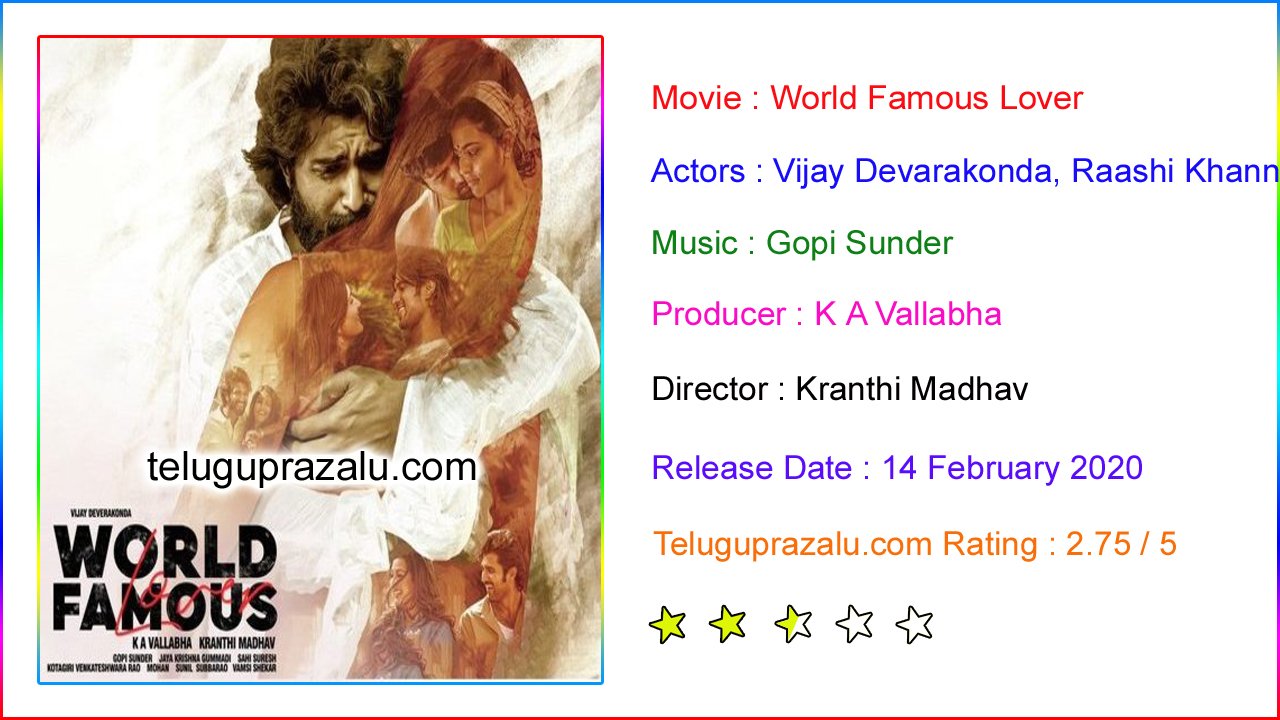 World Famous Lover is a film that has created a good buzz in the last few days. It has released today and let’s see how it is.

Gautam(Vijay Devarakonda) is a struggling writer who lives in his own world. He ignores his girlfriend Yamini(Raashi Khanna) completely. After a point of time, Yamini gets very upset and breaks up with him. Realizing his mistake, Guatam gets back to his senses and wins Yamini and her love back. Well, how does he do that and where do all the other heroines Aishwarya Rajesh, Catherine Teresa, and Isabella feature in this set up?

As always, Vijay Devarakonda does a superb job in his role. He as the struggling writer is okay but Vijay is superb as Seenayya, the Singareni employee. The way he speaks the language and his chemistry with Aishwarya and Catherine is very good.

Speaking of Aishwarya, she is the best part of the film. You will fall in love with her role as she does a superb job with her girl next door character. Her emotional outbursts and the way she delivers the performance with her eyes most of the time is very good.

Raashi Khanna too does an amazing job as she sheds her glamorous image and opts something performance oriented. Raashi as Yamini is especially good in her emotional avatar and dominates Vijay in many scenes.

Catherine Teresa is neat in her role and does what is expected of her. In all the love stories, the Telangana story featuring Aishwarya, Catherine and Vijay is the best and has good moments. The first half has some good scenes and the drama showcased is good.

The film has various issues and these slowly come out in the second half. There was absolutely no need to showcase Vijay in such an intense avatar. His get up and some moments remind us of Arjun Reddy instantly.

Also, the climax looks fake as things could have been ended at the press conference scene to make a good and justifiable ending. Just to have a happy ending, the makers spoil the stance of Raashi’s role and made things cinematic.

The Paris episode is outright boring and has not many exciting scenes. Though all the stories are connected well, their relation to the actual theme of the story is not shown well.

Vinay needs to tone done his acting as he is getting repetitive in all break up love stories and in his emotional outbursts. The film is a serious drama and has no entertainment at all which is a big letdown for general audience.

Production values of the film are top notch as the film looks rich in every scene. The camera work is amazing as each love story has a different texture. Music is the biggest drawback as the songs and BGM by Gopi Sundar is disappointing. Vijay Devarakonda has not been styled well at all. Dialogues are pretty good and those written for Yamini and Suvarna’s role are just amazing.

Coming to the director Kranthi Madhav, his story idea is contemporary and he has connected them also well. But his ending, emotions in the Paris love story take the film down. His narration did not give proper justification to the characters in the end as Raashi and her role which is key is not justified at all. Also, there was good scope for romance and good music but he did not make use of it either.

On the whole, World Famous Lover has a very interesting premise but the narration is dull in the second half. The movie boasts of some great performances as Aishwarya Rajesh’s track with Vijay is endearing and evokes good moments in the first half. Box office wise, things will be a bit difficult for the film as it has a serious theme and will be only liked by those who love dark romantic dramas.