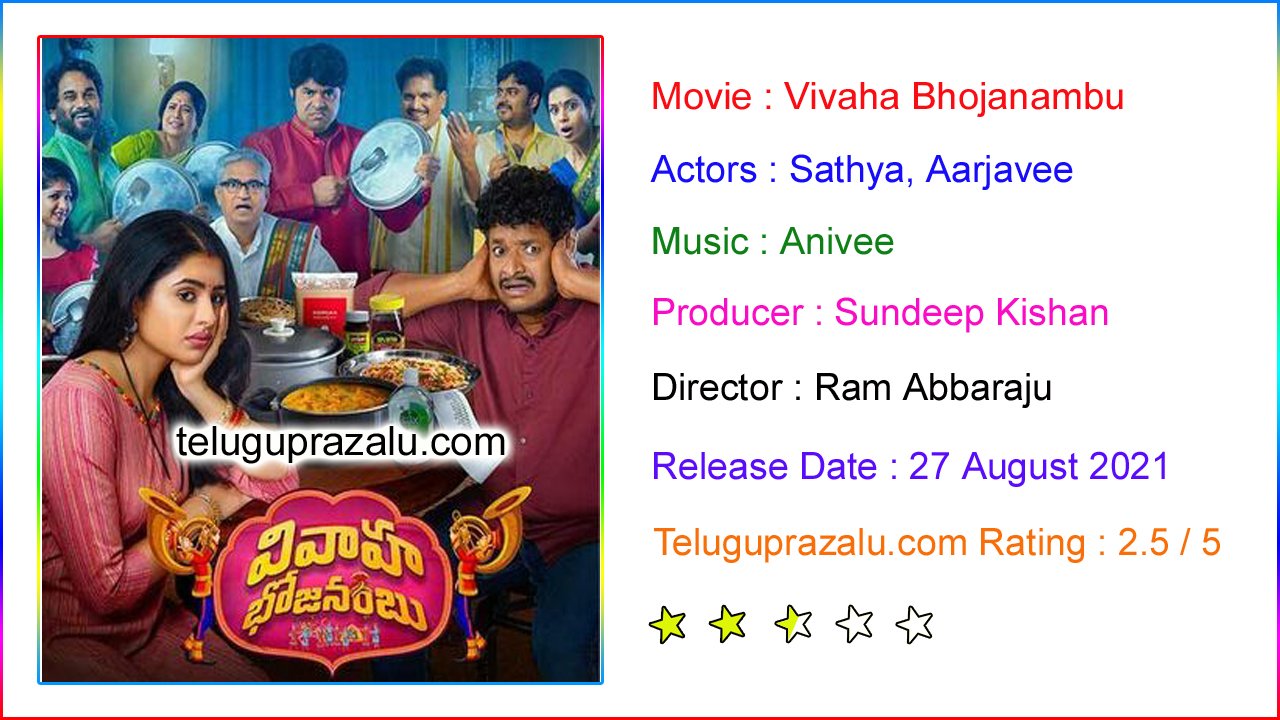 Popular comedian Satya makes his debut as a hero with the just released comedy entertainer ‘Vivaha Bhojanambu’. Produced by hero Sundeep Kishan and directed by Ram Abbaraju, the film has Coronavirus and lockdown as its backdrop, and had a direct digital premiere on Sony LIV app today. Here’s our review.

Mahesh (Satya) is a lower middle-class LIC agent in Hyderabad. He is a miser, but always claims that he is just “careful” with his money. He falls in love with Anitha (Aarjavee Raj) who hails from a rich family based in Vijayawada. Her father Venkateswara Rao (Srikanth Iyengar) reluctantly agrees to their marriage. As per the bride’s family tradition, the groom should carry out the engagement and wedding formalities. Worried about the sky-high expenses and left with no choice, Mahesh agrees unwillingly.

What happens when COVID-19 strikes the city during the wedding? How does a frugal Mahesh host Anitha’s family at his home for weeks after weeks when PM Modi extends the lockdown? What lies did Mahesh and Anitha tell her family to get their approval? Why did Mahesh become a miser afterall? Will Anitha’s father finally accept a ‘poor and not so good looking’ Mahesh wholeheartedly? Watch the film on Sony LIV to know the full story.

Satya is a show-stealer as a helpless miser. He brightens up the screen with a spirited performance. He excels in his trademark sarcastic humor, and scenes where he vents out his frustration put a smile on audiences’ faces. His silly antics and desperate attempts to reduce expenses while hosting Anitha’s family will tickle the audiences’ funny bones in several scenes.

Newcomer Aarjavee Raj as Anitha looks pretty in a girl next door avatar. She performs well in her limited role. Rest of the cast, especially Srikanth Iyangar, Sudarshan and Shivannarayana, get meaty roles and they do justice to their characters. Heart becomes heavy whenever TNR, who lost his life to COVID-19 during the second wave, appears on-screen.

The basic premise of Vivaha Bhojanambu, where a miser hosts his rich, high maintenance in-laws’ family at his 1 BHK home for several weeks during the COVID-19 lockdown, is quite interesting. There are a few scenes that leave us in splits thanks to the actors’ terrific comic timing and the way the director sets them up. Producer Sundeep Kishan makes a hilarious cameo appearance as Nellore Prabha, and he impresses with his Nellore slang and don’t give a damn attitude.

Despite having an immense potential to churn out a hilarious entertainer, Vivaha Bhojanambu fizzles out soon after it begins. The unrealistic and illogical set-up and the lead actors’ characterization eventually offer a bland and tasteless wedding feast.

Throughout the film, Mahesh never respects Anitha’s father and her family members and rebukes them often. However, his character is shown to have an emotional side towards the end. Unfortunately, it’s too late to empathize with him by then.

The reason why Anitha falls in love with a ridiculous miser like Mahesh is not convincing at all and appears too cinematic. As a result, one can’t be convinced enough to root for their wedding despite the apparent differences in their status and lifestyles.

Silly and illogical writing are the primary drawbacks of Vivaha Bhojanambu. The film also suffers largely from its predictable screenplay. The music, cinematography and editing are decent and drive the narrative forward. Production values are okayish, and it rightly appears that the film is made on a shoestring budget given the COVID-19 restrictions.

Once the movie ends, one can’t help but wonder if Vivaha Bhojanambu, instead on an OTT platform, would have fared slightly better in theaters, with audiences sharing a few laughs here and there. The film expects its audience to conveniently forget logic and only enjoy its comedy. So, if you are planning to watch Vivaha Bhojanambu this weekend, we suggest you to keep your expectations in check to enjoy this wedding feast better.