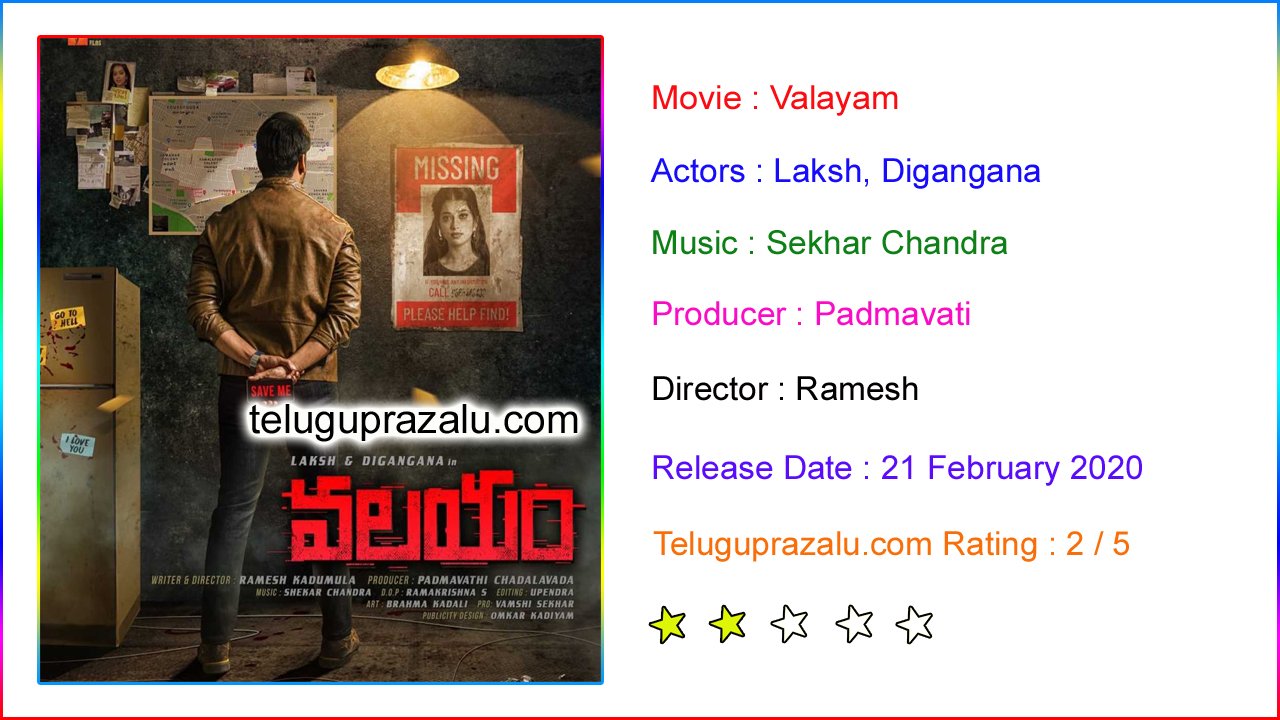 Continuing the trend of low budget films, yet another film which has hit the screens today is Valayam. Let’s see how it is.

Aravind(Laksh) and Disha(Digangana) are a happy go lucky couple who spend their life with each other happily. The twist in the tale arises when Disha goes missing all of a sudden. What happened to Disha? Where did she go? Is Aravind anyway connected to her missing case? To know this, you need to watch the film on a big screen.

The opening Pelli Choopulu scene between the lead pair has been executed well. The honeymoon song featuring the lead pair is good and has also been shot well. Laksh is just about okay in his lead role. He needs to work on his diction a bit but he managed well in the film.

Even though heroine Digangana had limited screen time, she did well with her performance. Ravi Prakash, who played a cop was superb in the film and did way better than the hero. Noel, Kiriti and Chitram Sreenu did a good job in their respective roles.

One of the biggest drawbacks of the film is the screenplay which goes for a toss. The director failed to generate any interest in the proceedings as the scenes did now showcase any thrill.

The heroine does not have anything to do in the second half and this is where the romance angle goes missing. The film does not have any commercial elements even though there was a good scope for it.

There are not many scenes that showcase the pain that the husband goes through after his wife goes missing. The emotional angle goes for a toss and this is where the proceedings become boring.

Music by Shekar Chandra is just about okay but his BGM was good. The camerawork of the film is pathetic and so is the editing as close to ten minutes could have been chopped off. The production values of the film are also below par. Coming to the director Ramesh, he did a poor job with the film. His screenplay is the biggest villain as the proceedings do not have a flow and create any sort of impact.

On the whole, Valayam is a slow-paced suspense thriller that has nothing going it’s way. The weak screenplay, jaded narration, and lack of impactful scenes bring the film down in no time and make it a tedious watch this weekend.