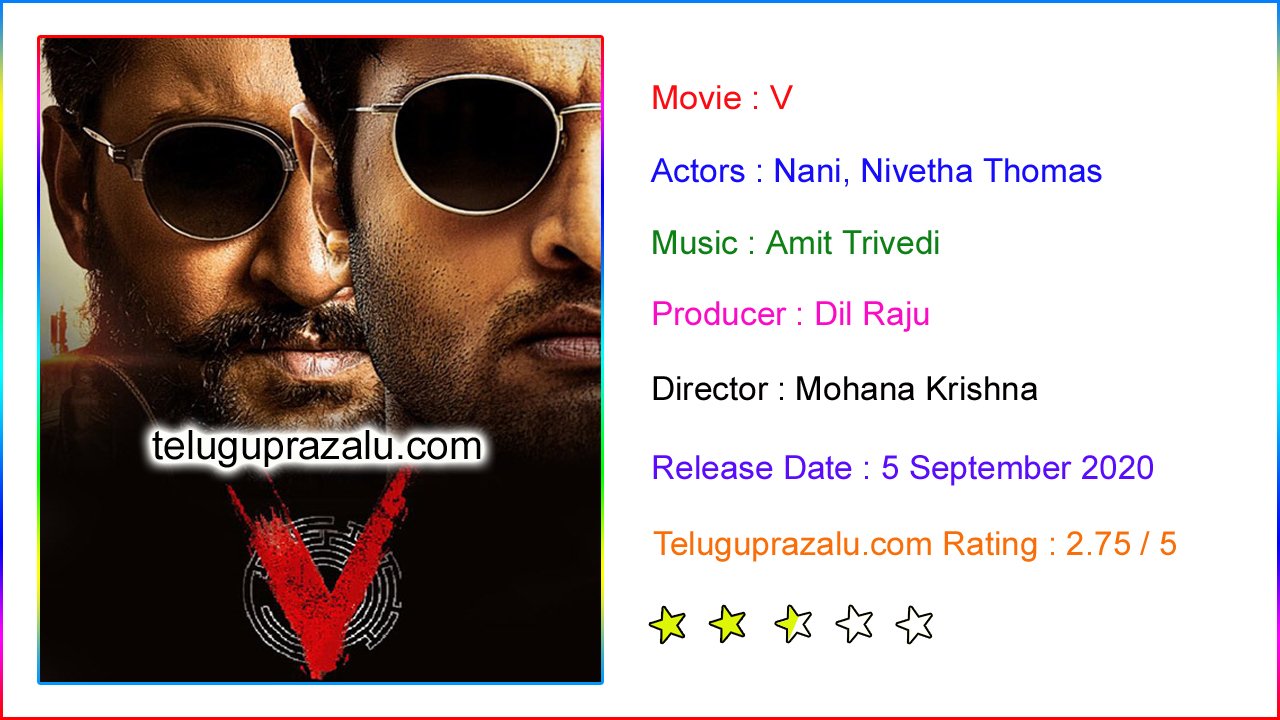 Post the lockdown, so many films have released on OTT platforms but today’s release, V is one of the biggest films to release in Telugu. Starring Nani and Sudheer Babu in lead roles, this film is out on Amazon Prime. Let’s see how it is.

A police officer gets killed in Hyderabad and DCP Aditya(Sudheer Babu) is brought in action to handle the case. The killer(Nani) leaves clues for Aditya and says he will commit more murders in the days to come. With this, a cat and mouse game starts where the murders keep happening and Aditya gets clueless. Who is this killer? Why is he killing everyone? What is his connection with Aditya? and where do the two heroines Nivetha and Aditi Rao feature in this setup? To know this, you need to watch the film.

Nani is the life and soul of the film and it is his negative act that lifts the spirits of the film. Nani does an action avatar for the first time and he is pretty good. The way he uses his unique dialogue delivery to create a negative effect is amazing. Nani has an amazing screen presence and he uses his swag in the best way possible in the film. One can say that his new avatar is the major plus of the film.

Sudheer Babu is a perfect fit in his cop’s role and showcases what he is capable of. He is the hero of the film and takes on Nani in full force. Be it his dances, emotions, or dialogue delivery, Sudheer Babu is good.

Nivetha Thomas is okay and looks glamorous in the film. She shares decent chemistry with Sudheer Babu. Aditi Rao comes in the key second part and makes her presence felt. The action sequences or you can say the murders showed are grippingly executed in the first half and raise the curiosity levels.

The second half is where the film goes for a toss. Once it goes back into the flashback mode, things become very slow, and routine scenes are showcased at a stretch. One can easily guess that Nani is doing all this with a motto and because of this, his characterization looks weak. Both the love tracks of Nani and Sudheer Babu are very dull and executed in a pale manner.

All those who think there will be solid twists will be mistaken as the story is a routine revenge drama with a straight forward and predictable plot. Also, the starting of the film is a bit slow as the makers waste too much time to get into the actual story.

The biggest drawback is the climax of the film. After all the hype, one feels that there will be a big twist but sadly that does not happen and the film is ended on a silly note. There should have been a proper masala ending and with good scope to do that, the director does not make use of it and ends the film just like that which disappoints the audience.

For the first time in his career, Dil Raju is producing an action film and he has gone all out with V. The production values of the film are top-notch as the visuals by PG Vinda and money spent is seen in every scene. Amit Trivedi’s music is okay but Thaman’s BGM is even better. His score for all the thrills and tense moments is superb. The stars have been designed quite stylishly and especially Nani. The lyrics for all the songs are very good and the art direction is amazing.

Coming to the director Mohanakrishna Indrganthi, he has taken a complete U-turn from his normal films and surprises with V. Even though his story is routine, the way his screenplay runs the first half was quite good. But looks like he ran out of ideas in the second half and made things routine, dull, and rushed. If he would have worked on a good twist in the end, things would have been something else.

On the whole, V is a typical revenge drama that does not live up to the hype. It is a film with routine cat and mouse set up but the two stunning heroes make things quite interesting for the audience. Nani’s surprising new avatar, Sudheer Babu’s sincere act, and the first half are major assets. But the second half becomes slow with dull narration and a silly ending. Barring this, V is a perfect OTT release that can be only given a shot for its star presence and stylish taking. The only thing you need to do is to lower your expectations while watching the film.