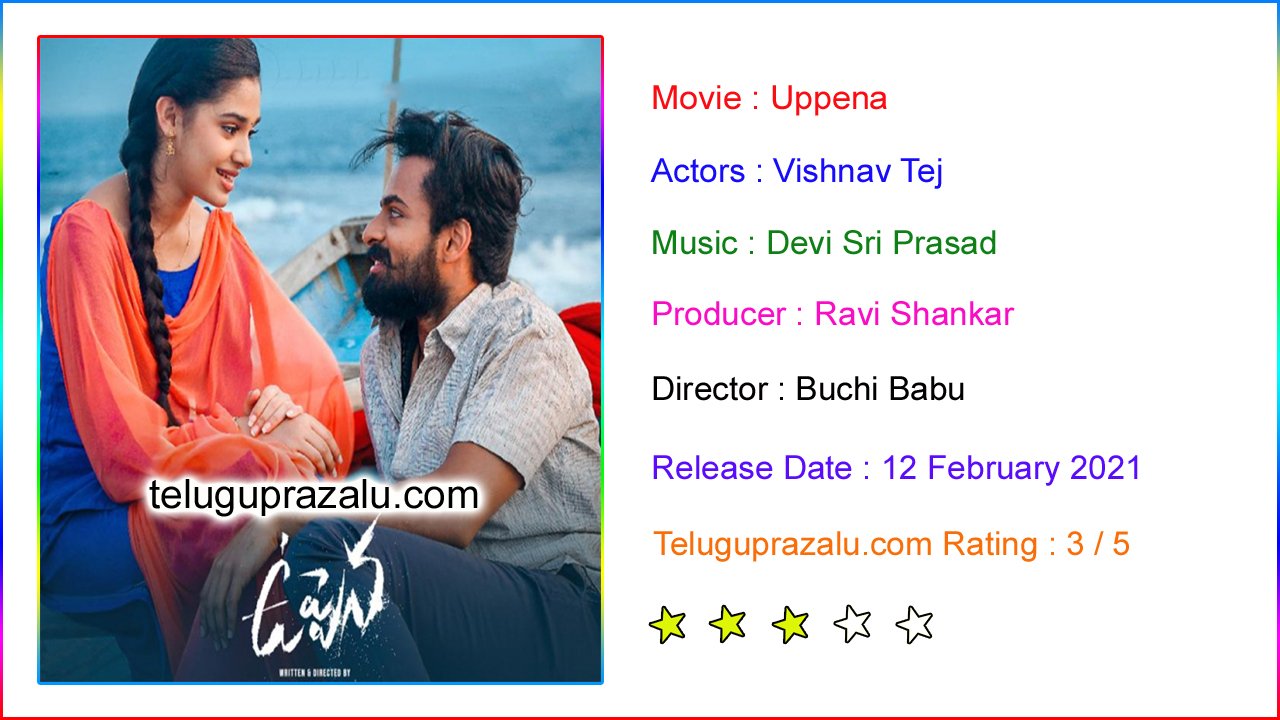 Uppena is a film that has created a lot of hype from the day the promos were out. The film is finally out and let’s see how it is.

Aasi(Vaishnav Tej) is a poor fisherman’s son who falls in love with Sangeetha(Kriti Shetty), the daughter of a rich landlord Rayanam(Vijay Sethupati). The couple gets deep in love but a serious problem between the two villages changes the story upside down. Seeing this, the couple takes a crazy step and this changes the course of their life in a big way. What happens next forms the rest of the story.

One of the biggest plus points of the film is Devi Sri Prasad’s splendid music. It holds the narration in a big way. Every song is superbly composed and shot well. The premise of the film is also quite good and has an earthy feeling.

Vaishnav Tej makes a solid debut and is perfect in his role of Aasi. Be it his impressive eyes, body language, and dialogue delivery, Tej is quite good and one cannot believe that it is his first film. The way he carried his emotions in the film throughout shows that he is surely a talent to watch out for.

Vijay Sethupati is good as the main villain. Though he does not get ample time in the first half, he is menacing in whatever scenes he gets. The camera work is stunning and dialogues need a special mention. Sai Chand is pretty good as a hero’s dad.

But the real star of the film is the heroine Kriti Shetty. What a debut she has made and the young actress will surely be the next big thing as Kriti has the looks. and acting prowess. The climax is narrated through her and Kriti is just amazing and impresses you completely. The chemistry between the lead pair is so good to see on screen.

The second half of the film gets a tad slow. The first half is ended with a good twist but once that is revealed, things get mundane and boring. In the second half, the couple elopes and this brings routine scenes into the picture and because of this, the pace drops and scenes become predictable.

The climax is hard hitting but one cannot understand Vijay Sethupati’s stand in all this. His character which is showcased so strongly through the film becomes quite dull and helpless in the end which looks a bit odd. The dialogues mouthed by Kriti during the climax are quite bold and people might have mixed opinions about it.

Devi Sri Prasad is the life of the film as his music will bring in the crowds. His BGM is also amazing and elevates the story well. Dialogues are meaningful especially those written for Vijay Sethupati. The production design is very good and so were the costumes designed for the lead pair. Editing is decent and so was the makeup for all the fishermen.

Coming to the director Buchi Babu, he makes an impressive debut with Uppena. Though he chooses a routine story, he adds a crazy twist and molds the story through it. He extracts solid performances from the lead cast and shows amazing romance. If he would have made the second half a bit crisp, things would have gone to another level. Nevertheless, Buchi Babu is a talent to watch out for.

On the whole, Uppena is a moving love story with an impressive star cast. Amazing songs, a fresh pairing, and gritty drama are basic assets for this film. Though the story is a bit routine and parts of the second half are routine, the decent narration and hard-hitting climax make this film an impressive watch.