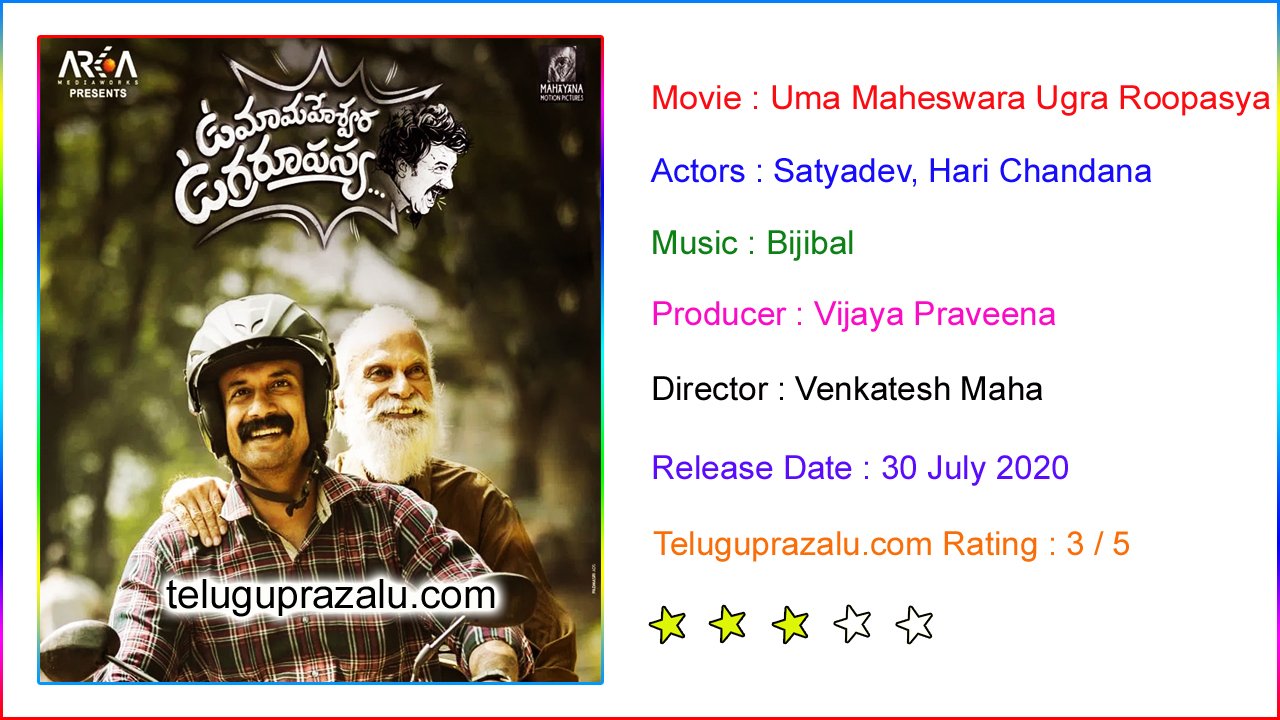 So, continuing the series of reviewing movies and shows during the lockdown period, our today’s pick is the Telugu film Uma Maheshwara Ugra Roopasya. The film is available on Netflix and let’s see how it is.

Mahesh(Satyadev) is a happy go lucky photographer who does not like getting into fights. On the other hand, his girlfriend Swati(Hari Chandana) leaves him for good and marries someone else. During this time, Satyadev gets involved in a petty fight and gets trashed big time by Jogi. He is ashamed, insulted in front of his hometown people. Furious with this incident, Mahesh makes a decision that he will at any cost take revenge on Jogi. But in this process, he falls in love with Jogi’s sister Jyothi(Roopa Koduvayur). The rest of the story is as to how Mahesh takes his revenge and also succeeds in love.

We all know that this film is a remake of Maheshinte Prathikaaram, the hit Malayalam film. The makers have adapted it quite well and have set it beautifully in the Aruku region. The backdrop, nativity, and dialogues are impressive and give the film an earthy feel.

Right from the first scene, the film belongs to Satyadev. He has given his career-best performance in this film. Be it the vulnerability, in the character, expressions in emotional scenes, Satyadev is top-notch and shows a lot of maturity. His performance in the key interval scene, break up episode and climax was quite natural and brings a lot of depth to the film.

With each passing day, the young actor, Suhas is getting better with his acting and does a superb job in the film. His comedy timing, character-based transformation, Suhas looks like a solid actor and the one to watch out for. Heroine Roopa Kaduvayur is pretty good and impresses in the latter part of the film. TNR does well in his small role. Senior actor Naresh is amazing as Bajbji and brings a lot of depth to the film.

The first hour of the film is superb with natural performances, romance, light-hearted comedy, and amazing conflict points. But once the second half starts, there is nothing much for the director to showcase.

The romance that is showcased looks good but too many scenes like the hero getting professional in photography, learning martial arts, and the heroine dancing on the street are dragged for no reason. All these scenes are not bad but they could have been avoided to make the film crisp.

Overall, the film needs at least ten minutes of editing. Also, the proceedings take a lot of time to get into the actual plot during the beginning. As too much time is wasted on other factors, the climax is also wrapped up in a simple note.

The locations are superb and special mention to the awesome camerawork which showcases the film in natural light. Music is decent but the background score was even better. The lyrics, production design, and dialogues are amazing. The screenplay could have been tighter at the end of the film.

Coming to the director Venkatesh Maha, when compared to his debut film Care of Kancharapalem, there were a lot of expectations on him with this project. One can say that he has done just a passable job with the remake. His characters, performances, and narration in the first hour are amazing. But the way he slows down the film in the second half makes things predictable and slightly boring for the audience.

On the whole, Uma Maheshwara Ugra Roopasya is an earthy village drama that has some amazing performances. Satyadev single-handedly carries the film with his brilliant act and the first hour is pretty engaging. But a predictable second half and rushed up climax, makes things a bit dull. If you are one who does not mind the slow pace, this film ends as a passable watch during this lockdown period.