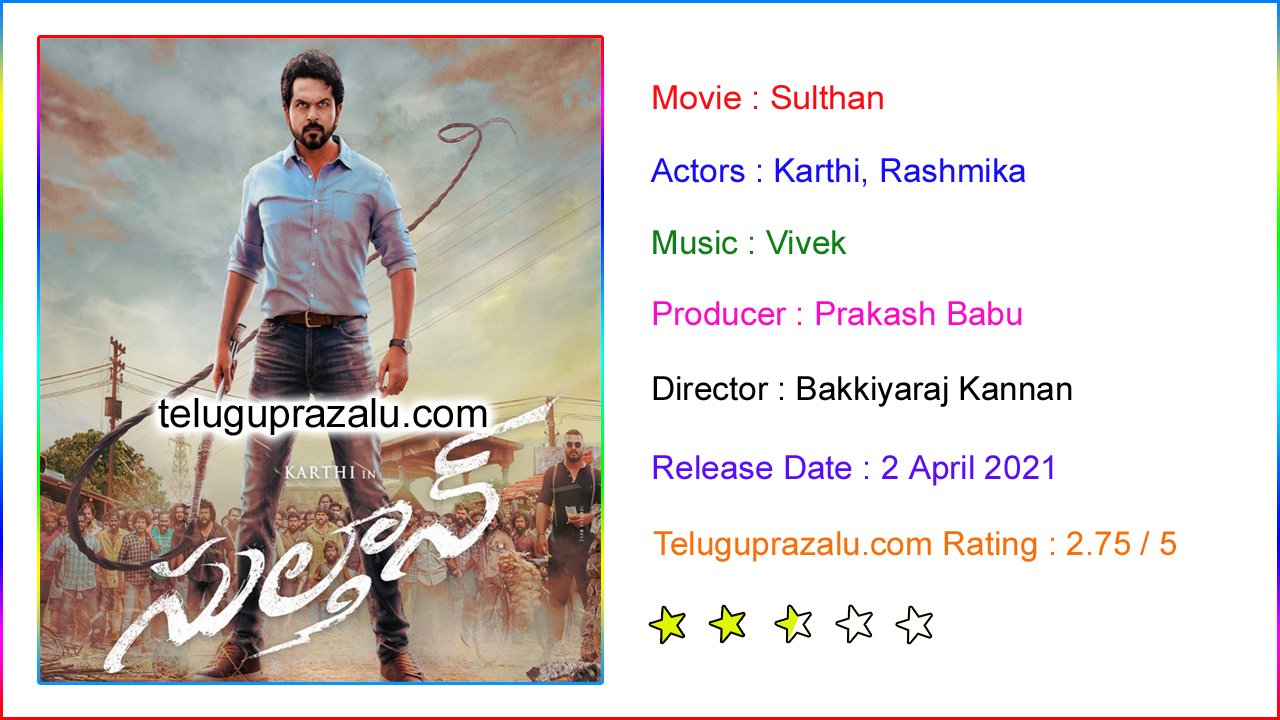 Tamil star Karthi teamed up with the producers of his previous hits, Khaakhee and Khaidi, for Sulthan. The film marks Rashmika Mandanna’s Kollywood debut. Sulthan has finally hit theaters today after a decent round of promotions. Let’s see how the film is.

Vikram aka Sulthan (Karthi) is a Robotics Engineer in Mumbai. His father Sethupathi (Nepolean) is a godfather in Vizag, with his lieutenant Mansoor (Lal) and 100 henchmen living under him for years. After Sethupathi’s demise, Sulthan vows to reform Mansoor and all the 100 henchmen. While Lord Sri Krishna took Pandavas’ side in Mahabharata, Sulthan takes his 100 henchmen’s (Kauravas) side and pleads them to quit crime and lead a normal life.

It is then that Sulthan visits a village in Amaravati and falls in love with a village girl named Rukmini (Rashmika Mandanna) and becomes a farmer to win her love. Sulthan also confronts a notorious village-head Jayendra (KGF Ram) and a powerful industrialist (Nawab Shah), who plan to snatch away the villagers’ agricultural lands to set up a Rs 10,000 crore iron ore mining company. Will Sulthan stop these forces and save the village? Will he succeed in reforming his Kauravas? You will have to watch the movie in cinemas to know the full story.

Hero Karthi is back with a bang in yet another intense role. His riveting performance is one of the main highlights of Sulthan. He effortlessly oozes heroism in the role of a saviour. Rashmika gives a decent performance as a demure village belle. Although Rashmika’s screentime is short, her character gains prominence by motivating Sulthan to fight for her village. Lal, Nepolean and a few actors who played Sulthan’s loyal henchmen are quite good.

The emotional scenes featuring Sulthan, Mansoor and all the 100 henchmen are yet another highlight in the movie. The action-packed fights, especially the interval and the climax fight sequences, and Sulthan’s heroism elevation shots will enthrall mass entertainment lovers and Karthi fans. The comedy generated in the scenes featuring Sulthan and his Kauravas as farmers will evoke a few laughs.

Not having strong villains is the major drawback of Sulthan. Even though the deadly looking KGF Ram and the macho Bollywood baddie Nawab Shah have been roped in as the main antagonists, they hardly create any impact on the narrative. Sulthan wins over them very easily, with just a fist fight. This dilutes Sulthan’s heroism and depth in proceedings.

The basic storyline of Sulthan is nothing new. Of late, we have been seeing several movies where rich industrialists, young software professionals and even common people turn farmers and save agriculture. Sulthan is no different. Even though the rowdies turning farmers concept is fun, it has been dealt with in a simplistic manner.

Director Bakkiyaraj Kannan sets up a familiar story of a hero saving a village from greedy and powerful people in an interesting backdrop. However, he narrates it in a routine manner without creating impactful conflicts. While the songs composed by Vivek Mervin are average, the background score that’s played repeatedly during the fight scenes reminds us of the Pirates of the Caribbean theme track.

Cinematography is quite good and it brings out the dynamism in the action sequences shot using night effect. The film has a lengthy run-time and the Editor should have trimmed down a few comedy scenes featuring comedian Yogi Babu in the first half. Production values are grand, even though the film is shot in a very few locations.

Sulthan follows a template narrative of a hero turning a saviour and protecting a village from powerful, greedy villains. Even though the ‘rowdies turning farmers’ concept is interesting, the lack of a strong antagonist dilutes the story’s strengths and the protagonist’s heroism to a great extent. That said, Sulthan also has ample doses of action and hero elevation scenes to satisfy Karthi fans. You may watch the movie for its well choreographed action sequences and Karthi’s power-packed performance.