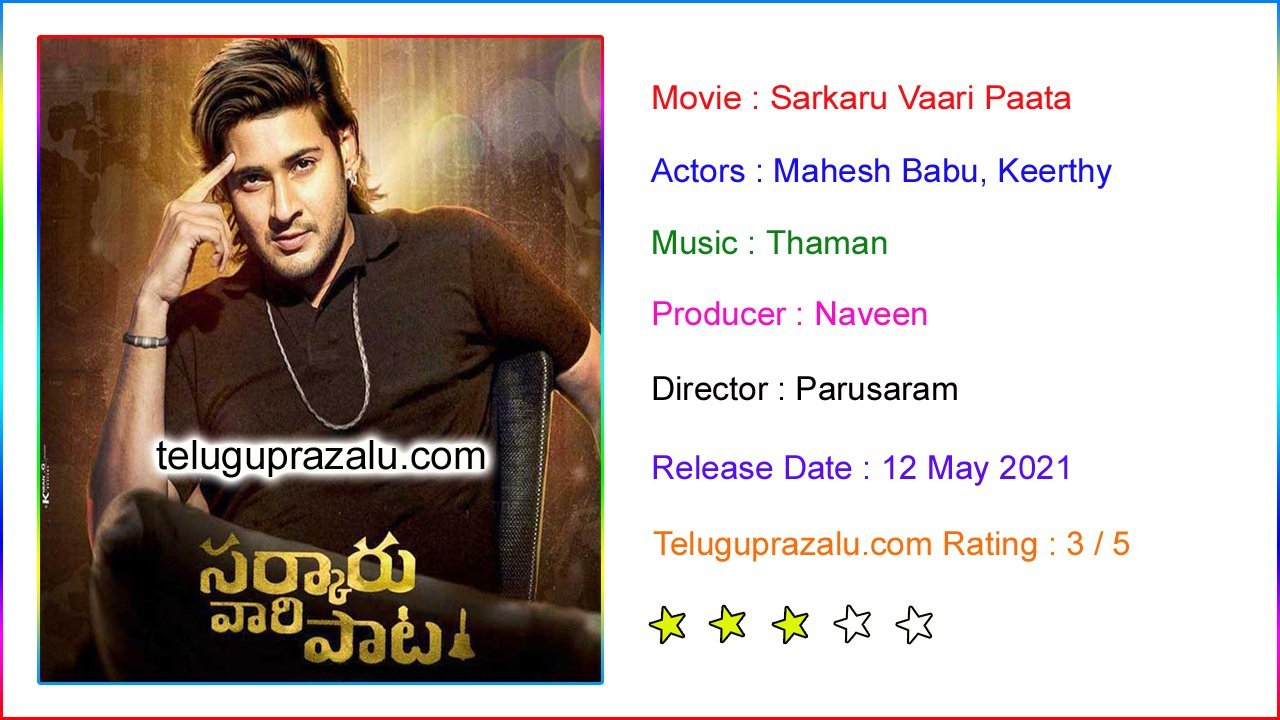 It has been raining biggies at the box office this summer. It is now time for Mahesh Babu’s biggie Sarkaru Vaari Paata which has been released with much hype and hysteria. Let’s see how it is.

Mahesh(Mahesh Babu) is in the loan recovery business in the US. A girl named Kalaavathi(Keerthy Suresh) takes a loan from him and fails to repay it. An upset Mahesh warns her but Kalaavathi brings her powerful dad Rajendranath(Samuthirakani) into the picture. Left with no choice, Mahesh comes to India to get his money back. But bigger problems land him in a deep mess. What is that problem? Who is this Rajendranath? How did Mahesh handle him? That forms the rest of the story.

Sarkaru Vaari Paata is an out-and-out Mahesh Babu show from beginning to end. It is his charisma, screen presence, comedy timing, and action avatar that will keep the audience glued to their seats. Mahesh looks extremely handsome and does an amazing job in his powerful character. He has also danced well in all the songs.

The love track in the first half is quite good. Mahesh Babu and his comedy timing are too good during these romantic episodes. Keerthy Suresh plays a role with a slightly negative touch and was refreshing to see. Her chemistry with Mahesh is top-notch.

The villain’s character is quite key to the film and Samuthirakani is a perfect fit. He gives good opposition to Mahesh and the hero-villain episodes work well in the second half. Vennela Kishore’s comedy is very good and the one-liners he shares with Mahesh were quite good.

The interval twist has been handled quite well by Parasuram. Also, the manner in which common people who pay heavy EMI’s get into problems has been showcased well. The songs are one more highlight of this film as they are placed well.

Parasuram has directed this film and narration-wise, he has taken a very safe route. His story lacks the punch and the way the hero gets connected to the whole loan recovery angle featuring a powerful politician looks forced. Too many liberties have been taken in this regard and there are many scenes that look repetitive.

Story-wise, there is nothing novel that is showcased here. It is a typical mass commercial hero movie format where things happen according to the hero’s convenience. The track of Keerthi Suresh, Subbaraju, and Mahesh looks forced in the second half.

While watching the film, one gets a feeling that there should have been more drama to elevate the pain in the film. But that does not happen as the narration is rushed by the climax. After a point in the second half, the film gets a bit preachy and lengthy as well.

Production values of the film are top-notch. The makers have spent a bomb and every penny shows in the visuals shot by Madhie. The fights are a special attraction and will be loved by the masses. The desert fight will be one of the major attractions. Mahesh has been styled superbly in the film.

Off late, Thaman has been in superb form and he continues the same with this film too. The songs are superb and are a major bonus, Thaman’s BGM is one more big high for the film. The artwork by AS Prakash is also amazing, especially the bank sets, they are very good.

Coming to director Parasuram, he has done a decent job with the film. As he got a big opportunity to direct Mahesh, he did not try anything fancy and showcased the star hero in the best way possible. If he had narrated the second half in a more dramatic manner and added strong emotions, the output would have been even better.

On the whole, Sarkaru Vaari Paata is a typical masala entertainer made for the masses and fans. The film runs on a typical commercial formula template and the songs and fights are an added bonus. Though there are no wow moments in the film, Mahesh Babu is in supreme form and carries the entire film on his shoulders making this film a decent watch.