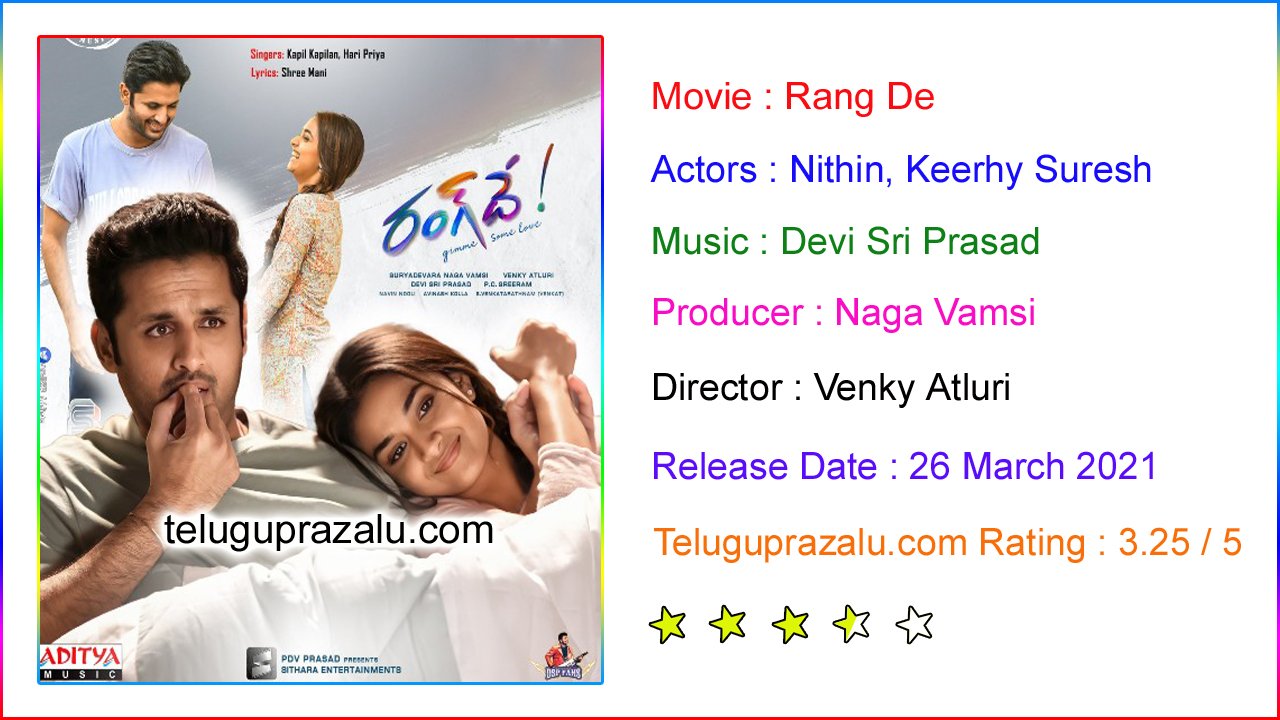 Rang De is a film that many have pinned a lot of hopes on as it has Nithin and Keerthy Suresh in lead roles. The film is out today and let’s see how it is.

Anu(Keerthy Suresh) and Arjun(Nithin) are two childhood friends who share a love and hate relationship. Anu loves Arjun but he hates her all his life. In a tragic turn of events, they get married and life changes for Arjun. Things become even worse when Anu announces her pregnancy. What will Arjun do now? How will the couple resolve their differences? That forms the rest of the story.

For any film to click, the drama needs to be strong and the same happens in Rang De. Credit should go to director Venky Atluri for writing such strong and emotional character for Keerthy Suresh which gives the film enough meat and scope for good drama.

After scoring so many flops, Keerthy Suresh gets a meaty character which gives her a lot of scope to perform. The award winning actress is amazing as the one sided lover and evokes solid emotions in the second half. Her chemistry with Nithin is also good.

For some reason, Nithin gives his best when it comes to romantic comedies. He as Arjun gives a mature performance in the film. Nithin looks handsome and kills it in the last half an hour of the film with his solid performance. The film has neat comedy and is not dragged just for the sake of it.

The family emotions and the whole pregnancy angle is handled with a lof of maturity. As always, Vennela Kishore is good with his comedy and evokes decent fun. Naresh, Vineeth, and other cast do well in the film. The songs have been shot quite well and PC Sreeram does a good job with the look of the film as it is quite vibrant.

Rang De is Venky Atluri’s third film and if you observe closely, his stories are quite simple and there is nothing novel to watch. The same is the case with this film as the story and proceedings are simple and get unleashed at an expected note.

Nithin’s character graph should have been given more edge in the film. The manner in which Keerthy Suresh develops feelings for the hero is also not shown in a proper way. More scenes to establish this thread and depth in writing would have helped this rom-com even more.

Music by Devi is good and so was his BGM. Choreography by Shekhar master is superb. Dialogues are neat and evoke goood emotion in the second half. Editing is crisp and so was the whole production design. Production values of the film are pretty good.

Coming to the director Venky Atluri, he has done an impressive job with the film. His last film, Mr Majnu had issues with the emotional part but he corrected all of that and wrote strong emotions for the film. His maturity in writing and establishing the love hate relationship between the lead pair was good. Though his story is simple, the comedy, romance, and drama provided in equal doses work for this film.

On the whole, Rang De is a well made romantic drama that has its heart in the right place. Strong emotions, decent comedy and solid chemistry between the lead pair are basic assets for this film. Story wise, you get a dejavu feeling but the manner in which the narration is handled with proper drama and sentiment make this film click and ends as a good family watch this weekend. Go for it.