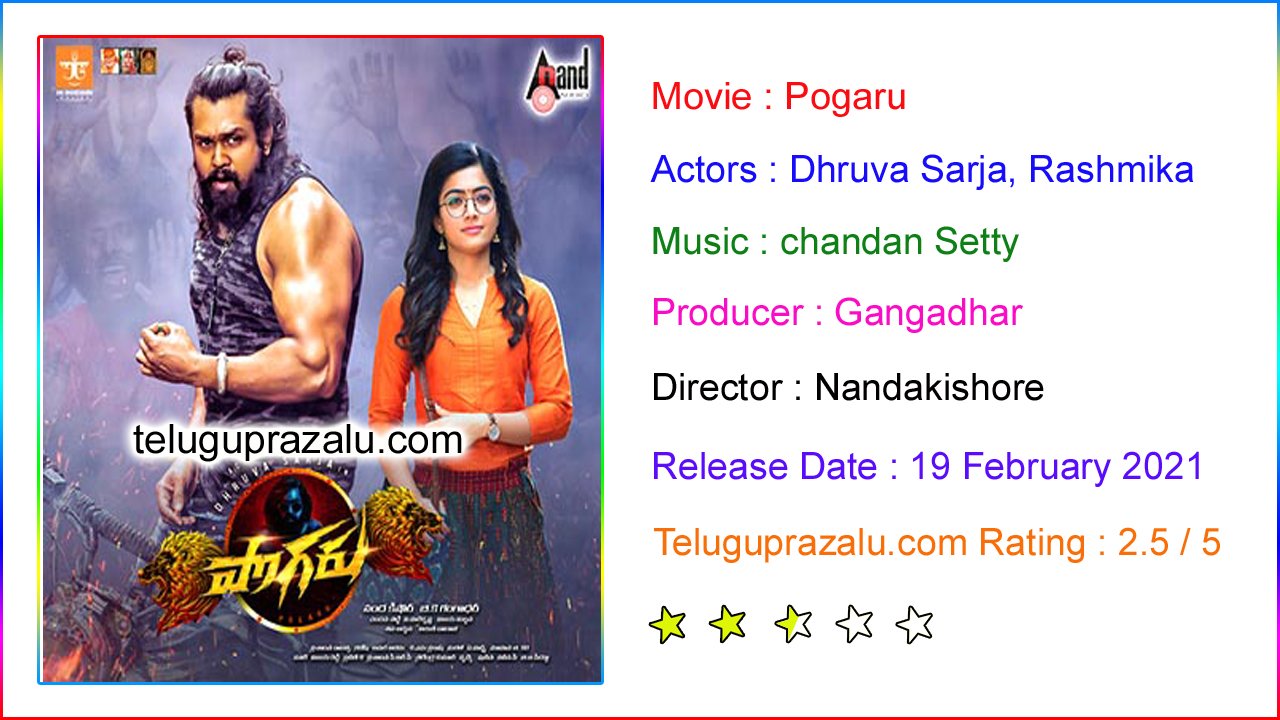 Action King, Arjun’s nephew, Dhruva Sarja is making his Telugu debut with the film Pogaru. The masala entertainer has been released on a good number of screens in Telugu states. Let’s see how it is.

Siva(Dhruva Sarja) loses his father at a very young age. Upon this, his mother(Pavitra Lokesh) marries again leaving Siva in distress. This big change in Siva’s life makes him go wild and lead a carefree life. Things change when he falls in love with a teacher(Rashmika) in his colony. Her entry changes the life of Siva in a big way. The rest of the story is as to how Siva wins the love of his mother and also handles his other issues.

Though it takes time for Dhruva Sarja to grow on you because of his mass look, he does a good job in his role. His looks, body language, and expressions nicely suit the nativity of the film. Dhruva Sarja and Rashmika’s chemistry is also quite good in the film and evokes decent fun.

Rashmika is also good in her nerdy look and does her role convincingly. The comedy quotient in her role is good. The emotional scenes in the second half are good. The director has managed to evoke god fun in the first half and takes the film to a decent breakpoint.

The story of the film is quite routine. Also, the problems showcased in the hero’s life look a bit over the top and are not there in today’s society. Also, the film is a regular mass masala film so do not expect much novelty in the proceedings. The love track is not that effective and could have been better.

Even though the flashback episode in the film looks stylish, it is filled with predictable scenes. Also, there are a few logics that go for a toss in this film. All those who want to see Rashmika in a lengthier role will be disappointed as she comes only for comedy and songs.

The editing of the film is not that great and so was the dubbing. The camerawork is good and so was the music and BGM. The production values of the film are top-notch as the money spent looks visible on the screen. Also, the director did not showcase things in a special manner and narrated the film in a true commercial manner with Dhruva Sarja in mind.

On the whole, Pogaru is an out-and-out masala film made for the masses. Noveltywise, there is nothing new showcased in this film. But Dhruv Sarja is unique and carries his mass role convincingly. If you love loud humor and a mass setup, this film is for you. But for the rest, they can look for something else.