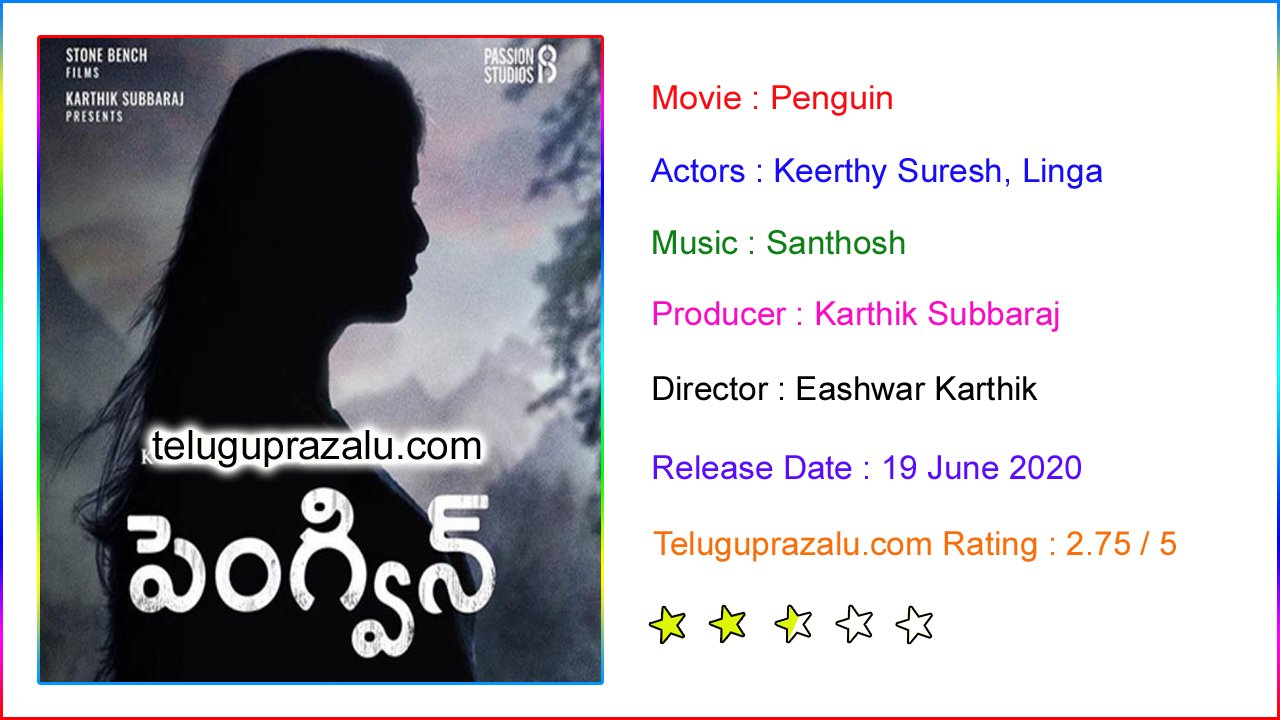 Keerthy Suresh’s Penguin is a film that has been promoted a lot from the last few weeks. The film has skipped the theatrical release and is out on Amazon Prime directly today. Let’s see how it is.

Rhythm(Keerthy Suresh) is a pregnant lady who is very upset in life because her elder son, Ajay(Master Advaith) has been missing from six long years. The general talk in the town is that Ajay has been kidnapped by a criminal who comes with a Charlie Chaplin mask and kidnaps other kids as well. As time passes by, Rhythm finds a major breakthrough in the case by dealing with the situation alone. Who kidnapped Ajay? What’s their motive? To know the answers, you need to watch the film on the big screen.

Keerthy Suresh is the life and soul of the film as she delivers a solid performance. It is only because of her, the film makes sense in many areas. The first forty minutes of the film is quite engaging and the story is set up well with a good curiosity factor.

The BGM by Santosh Narayanan is very good and elevates many scenes. Special mention to the camera work which shows the film in a solid manner with beautiful visuals.

The performance by the actor who played the doctor was decent. In the initial scenes, where the film goes front and back in time, this is shown well with a gripping screenplay.

One of the biggest drawbacks of the film is that it lacks the basic emotional depth. Even though Keerthy Suresh does well, the director did not showcase the basic desperateness of how a mother goes through when her child is missing from six long years. This is where the emotional angle does not hit you.

Director Eshvar Karthic had a good story but his execution is not that engaging. The so-called thrilling scenes are missing in the latter part of the film. The dubbing is pretty bad and the film is filled with heavy Tamil flavor and the supporting cast is not that effective.

Also, the way the doctor’s character is brought in to the story and the ideologies behind his behavior in the police station looks over the top. After creating so much hype during the initial stages, the climax is a letdown and has been showcased in many films earlier.

As said earlier, Santosh Narayanan’s music and BGM are very good and hold the film well. The production values and camerawork are top-notch. The detailing and the bloodshed showed in the film look quite real and special mention should be given to the art department. Dialogues are decent and so was the editing.

Coming to the director, Eshvar, he has done just a passable job with his narration. He starts the film well and when things needed to be set up well in terms of twists and thrills, he misses the plot and makes the film dull. The execution and the way the big twist in the plot is brought during the end is quite ordinary.

On the whole, Penguin is a mystery thriller that has a good performance by Keerthy Suresh. The first forty minutes, production values, and the premise are very good. But the film falls flat in the last half an hour where the thrills, emotions, and climax needed to be spot on. The film is perfect for an OTT release and can be given a shot if you have nothing else to do. But be prepared for the routine stuff that will be thrown at you.