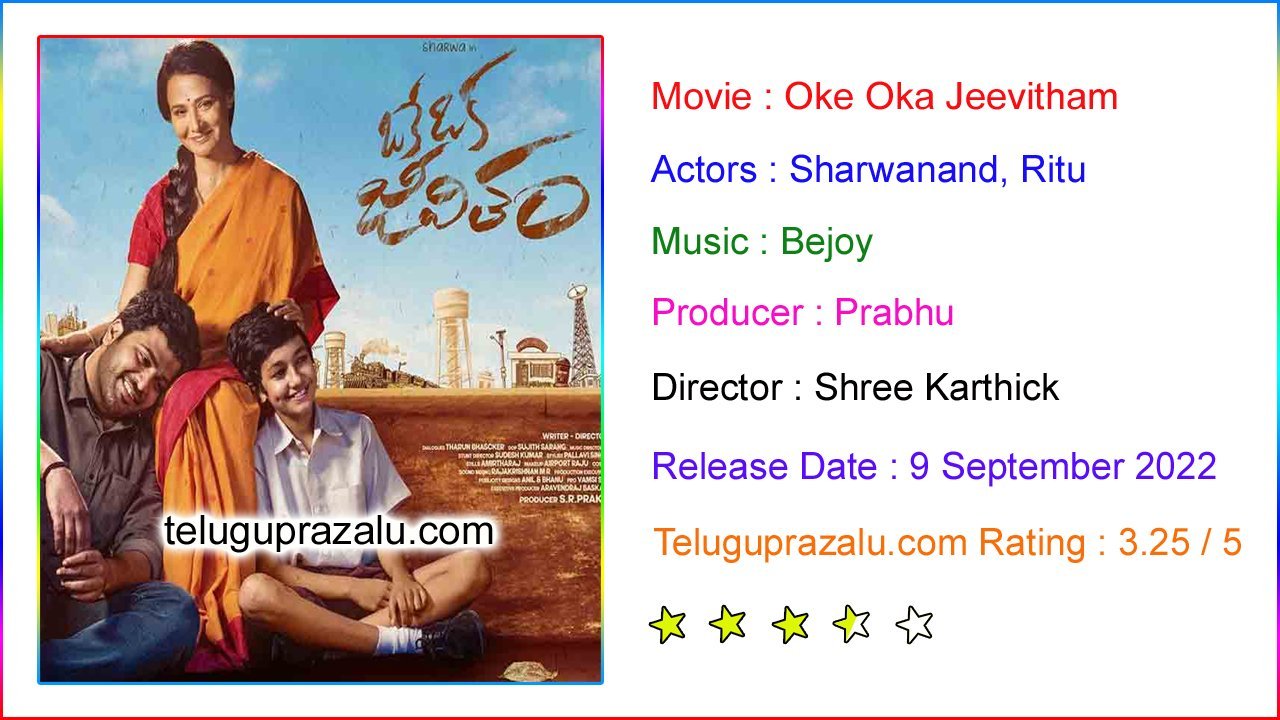 Oke Oka Jeevitham has been in the making for a long time now. Starring Sharwanand in the lead role, the film has hit the screens today. Let’s see how it is.

Adi(Sharwanand), Sreenu(Vennela Kishore), and Chaitu(Priyadarshi) are three close friends who have their own set of problems. One fine day, they encounter a scientist(Nasser) who promises to take them back in time so that they can solve their childhood mistakes. Excited with this, they agree and go back to 1998 through a time machine. On their arrival, they meet their younger versions and start correcting their mistakes. But the twist in the tale arises when the younger versions of the three kids use the same time machine and come to the future leaving the adults behind. What will the three friends do now? How will the groups swap places in time? To know the answers, you need to watch the film on the big screen.

Stories based on time machines have always been interesting. So, one would be curious to see how the makers would etch the storyline in the past and present. But the director Shree Karthik mixes the past and present stories superbly and adds comedy with a good dose of emotions which are a major highlight in the film.

Amala makes a comeback after a gap of ten years and is superb in the film. She plays Sharwa’s mother and brings tears to your eyes in many scenes. Her scenes with Sharwa are the mainstay of the film. Speaking of Sharwanand, we all know he is a sensible actor and boy he goes all out. His acting in all emotional scenes will surely move you. He as a subdued person plays his character so well and is the mainstay of the film. The climax scene with Amala shows his acting prowess.

Priyadarshi gets a good role and does well in his supporting act. Ritu Varma was also effective in her small but important role. One of the biggest assets of the film is the comedy by Vennela Kishore. Without going overboard, the ace comedian stays in his character and gives a superb performance. He evokes superb laughs and engages the audience throughout the film.

The first half of the film is quite entertaining and has been presented in a fun manner. Nasser plays the role of a scientist and is superb and brings a lot of depth to the proceedings. The three child actors were superb in their respective roles. One more major asset of the film is the engaging narration. Director Shree Karthik narrates the film in such a way that there is thrill, suspense and also fun in many scenes.

The second half is filled with emotional scenes. The manner in which the film ended in a very practical manner was so good to see. The logic is handled well when it comes to time travel and the aesthetics have been designed properly. The character arcs of three friends are neat and end on a proper note.

The film has a slow pace and takes a while to enter its main story. Not that the scenes are bad, a bit of a racy screenplay would have made matters even better for the audience.

The manner in which the three kids handle themselves in the present scenario is not shown aptly. Things are showcased in an easy manner and more explanation should have been given in this episode.

The time travel concept has been handled in a superb manner. The VFX used, time machine model and the production design is top notch. The camerawork nicely showcases the 90’s era in an effective manner. The dialogues are emotional and so was the music by Jakes Bejoy. Editing could have been even crispier to make matters better.

Coming to the director Shree Karthik, he has done a very good job with the film. His story is different and the conflict point he chooses for each of the friends looks impressive. The young director takes a lot of time to establish the plot but all that is ended in a proper manner in the second half. Karthik’s grip on emotions and comedy was impressive. He did not go overboard and made the film melodramatic. When you think the emotions are taking upper hand, the subtle comedy and thrills keep you engaged.

On the whole, Oke Oka Jeevitham is a well made science fiction drama filled with good comedy and sensible emotions. The performances of the lead cast, interesting backdrop, and gripping narration are major plus points. Barring the slow pace, this film has strong content and will surely impress those who expect different stories told in an engaging and fun manner. Go for it.