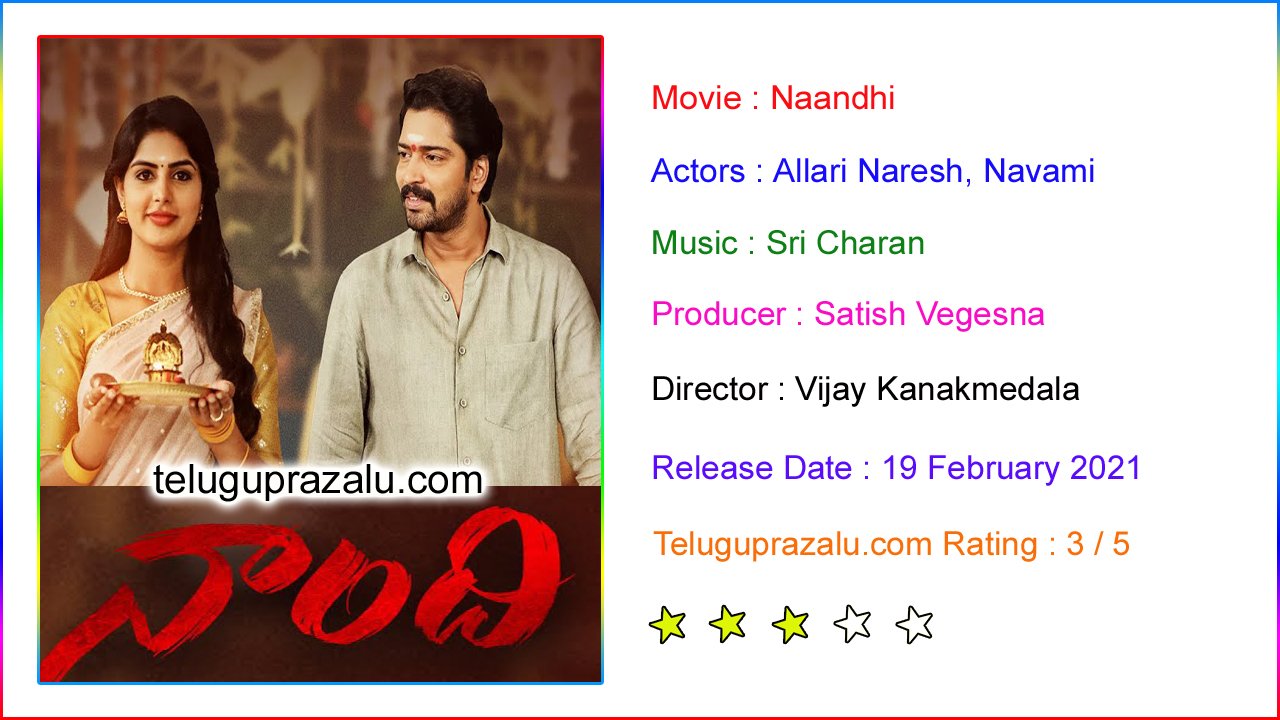 Allari Naresh is trying hard to score a hit and for this, he has changed gears and is ready with his new release Naandhi. The film has released today and let’s see how it is.

Surya(Allari Naresh) is a middle class software employee who leads a happy life with parents and fiance. One fine day, he is suddenly arrested in the murder of a noted activist and is sentenced for five long years. This is the time an advocate(Varalakshmi Sarathkumar) enters Surya’s life and gets him out. The rest of the story is as to how Surya takes revenge on the culprits by filing a reverse section 211 case with the help of Varalakshmi Sarathkumar and wins it.

This film is surely one of the best films in Allari Naresh’s career. Naresh is the king of comedy but whenever he tries different stuff, everyone appreciates it. The noted actor gives one of the best performances of his career and is at peaks with his emotional outbursts. He had a difficult role to portray and to carry the emotions for so long is tough but Naresh is amazing and gives an award winng performance. All the jail scenes where he breaks down emotionally will move you.

Varalakshmi Sarathkumar has become this sudden superstar and is killing it with every role of hers. She recieves a superb applause even with her simple entry in Naandhi. If Jayamma was loud, Varalakshmi is classy and emotes through her strong eyes and body language in Naandhi. She as the lawyer has solid screen presence and her voice is a big strength.

Comedian Praveen is very good as Naresh’s friend and emotes superbly. Priyadarshi was good in his role and so was Srikanth Iyengar as the lawyer. Harish Uttaman, who played the negative cop’s role was also impressive.

The emotions in the film are very strong in the first half and one easily gets involved with the way Naresh is going through several issues. The jail atmosphere, court setup and narration are good during this time.The BGM by Sricharan is also quite impressive.

The pace in the second half drops a bit after the engaging first half. The director highlights the section 211 and takes the film to another angle. All this is started well but the narration is a bit jaded and things are rushed by the end.

One would expect a gripping courtroom drama after the entry of a lawyer like Srikanth Iyengar. But that does not happen as routine political bigwigs getting involved and they trying to threaten the hero takes centre stage and things become a bit routine.

If the director would have narrated the technicalities in section 211 and handled the film on an confrontation mode, things would have been good.

Naandhi has very good camerawork as the jail and court visuals are very good. The mood created through the lighting is quite impressive. Editing is decent and so were the dialogues. The production values are very good as the film is shown in a new light.

Coming to the director Vijay, he has done a decent job with the film. He did not deviate for commercial elements and stays true to his emotions. His narration is impressive as he handles the subject in a taut manner and sets up characters nicely. Had he added more gripping courtroom scenes in the latter part, the film would have been effective.

On the whole, Naandhi is a dark and interesting courtroom drama with a good premise. Allari Naresh shocks everyone with his career-best performance and carries the film on his shoulders. Barring a slow second half and rushed up climax, this film has impressive performances and ends as a different watch for all those who like serious dramas.