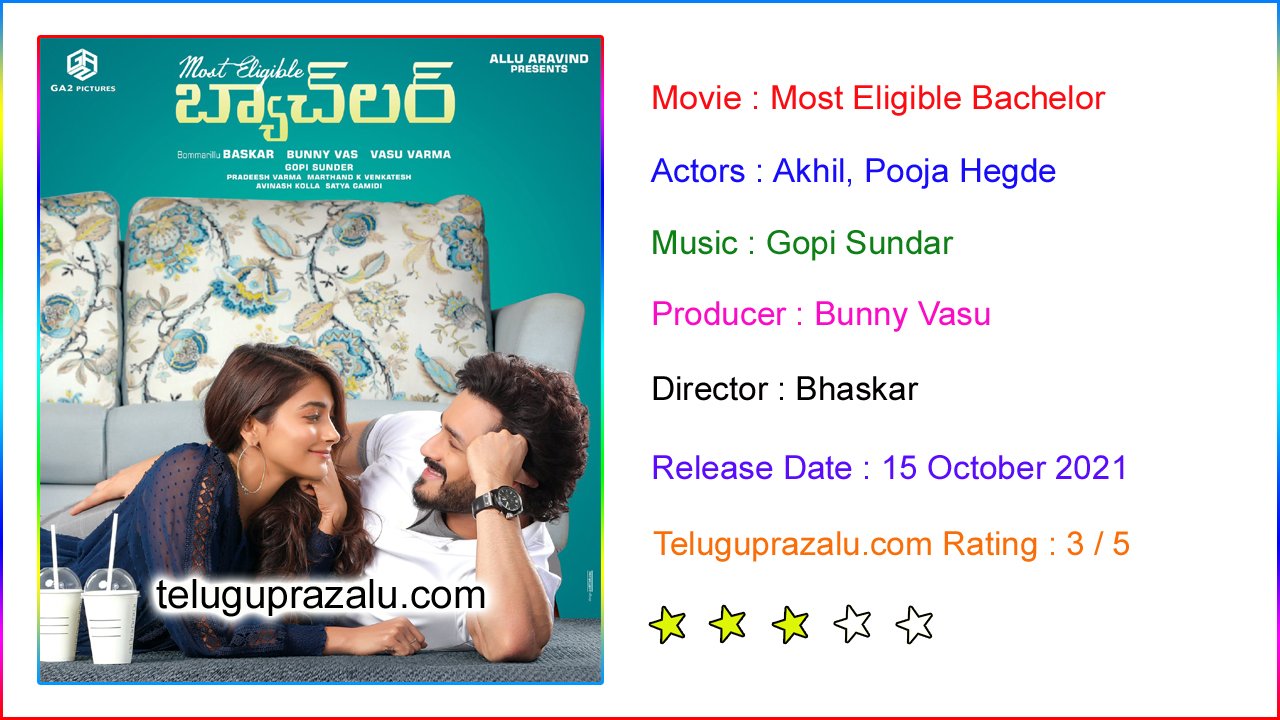 Most Eligible Bachelor is a film that has been in the making for a long time now. The film has released today and let’s see how it is.

Harsha(Akhil) is a well settled software employee in the US. He plans a perfect life for his would be and comes back to get married in India. His parents arrange various proposals for him but Harsha falls for Vibha(Pooja Hegde) a stand-up comedian who has a very practical mindset. But things change because of a small family feud and Harsha’s love story gets crashed. How Harsha changes his ideologies and wins Vibha’s heart is the basic story of the film.

Pooja Hegde looks beautiful as Vibha and also performs well in crucial scenes. Bommarillu Bhaskar has etched her role impressively and showcased her as a modern independent woman. Murali Sharma is decent in his role.

The songs are yet another added advantage to the film and have also been shot well. Sudigali Sudheer, Pragati, Vennela Kishore do their roles well. The camerawork is also quite impressive.

Last but not the least, Akhil looks handsome and gets a meaty role to perform. Though he looks naive in the first half, he gives a mature performance in the latter part. His chemistry with Pooja Hegde is also pretty good.

Most Eligible Bachelor has decent romance but the story had more scope to elevate romantic angle but that is not done by the director Bhaskar. Also, the way Akhil and his pelli choopulu episodes are executed look forced.

Akhil tries to woo Pooja Hegde by hiding from her. He meets her time and again in various ways but Pooja is absolutely unaware that it is the hero. There are many scenes related to this which have no logic.

The film is low on emotion. The family showcased and the drama elevated through them does not work. Also, the film has some froced scenes related to marriage, and problems in a relationship showcased do not create any depth as the screenplay is weak.

Production values of the film are top notch as the US and India visuals look rich. As mentioned above, music by Gopi Sundar is one of the highlights. Pooja Hedge’S look and costumes have been designed quite stylishly and the dialogues are also contemporary.

Coming to the director Bommarillu Bhaskar, he has done just a passable job with the film. His story is simple and is about a boy who wants a girl who can adjust in life. But the way he executed the conflict point on the lead pair is not that impressive. He keeps the proceedings breezy with songs and passable comedy but in all this, the major emotions take a beating along with the logic.

On the whole, Most Eligible Bachelor is a modern take on how today’s girls want their future partners to be. Good music and passable comedy are huge assets. However, the story, is simple and logic is missed here and there. All those do not mind the said things above can give this film a shot for its breezy romance.