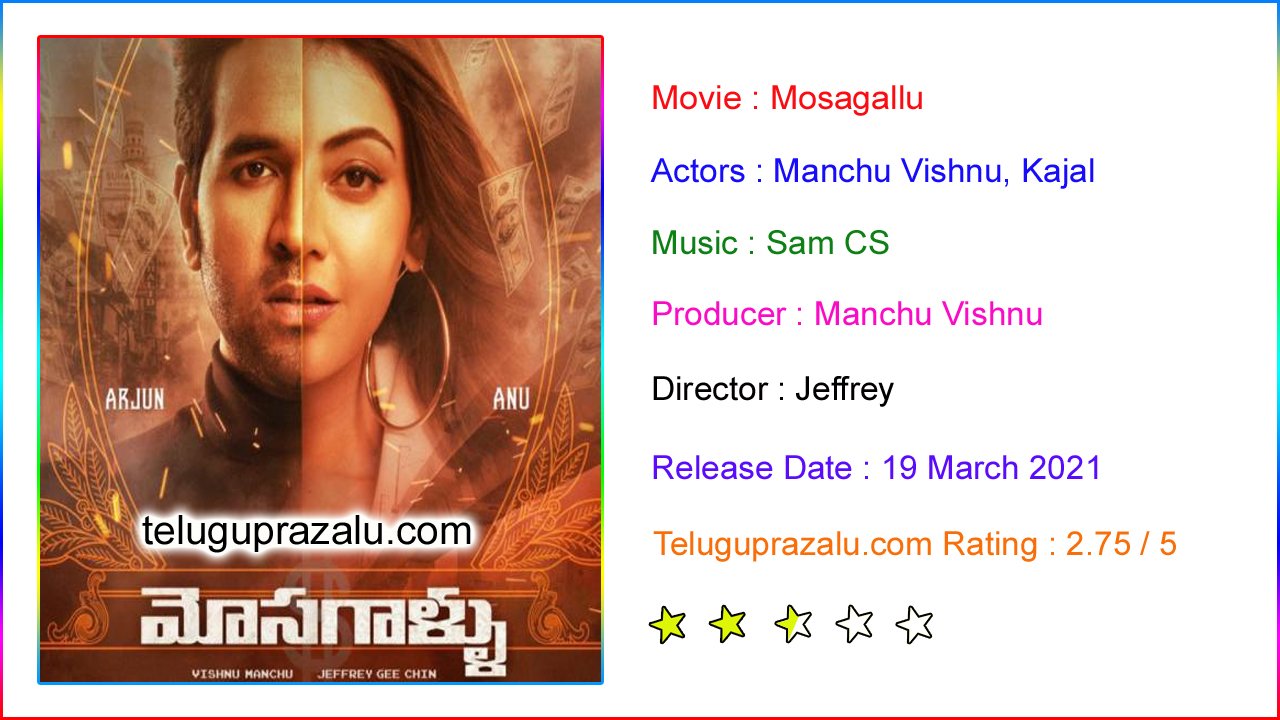 Actor, filmmaker Vishnu Manchu’s new film, Mosagallu, released today after generating a decent buzz. Kajal Aggarwal playing Vishnu’s elder sister, the sensational Mumbai call centre scam inspiring Mosagallu’s story and the film also having a Hollywood release have added to the positive buzz. Let’s see if the film turns out to be as good as its premise.

Arjun (Vishnu) and Anu (Kajal) are siblings who hail from a middle-class family in Hyderabad’s Raniganj. The brother and sister are unhappy with the kind of pathetic lives they are leading and dream of earning a fortune which will change their lives forever.

Arjun is a skilled call centre executive and Kajal is a skilled accountant. They join hands with Arjun’s boss Sandeep Reddy (Navdeep) and pull off a massive scam in the USA, sitting in their shady call centre Gemini Tech in Hyderabad’s old city. Within no time, they earn a fortune by posing as Internal Revenue Service (IRS) officials and duping several unsuspecting Americans, threatening them of arrest if they don’t clear their Income Tax dues.

Soon, their $300 million scam is unearthed by the Washington DC Federal Trade Commission’s Chief Officer and she seeks Hyderabad ACP Ajeet Kumar Bhatia’s (Suniel Shetty) help to nab the criminals. Will the trio get arrested? Will they be extradited to America to serve a 20 year jail term? You need to watch the movie in cinemas to know the rest of the story.

Vishnu suits the role well and he gave a decent performance. Kajal as Vishnu’s sister is equally good in the role of an ambitious young woman. These kind of roles are a cakewalk for Navdeep and he makes his presence felt. Naveen Chandra is good as an aggressive drug addict.

The film’s story is inspired by the Rs 2,600 crore Mumbai call centre scandal that rocked the USA a few years ago. Naturally, the setup is fresh and interesting as Telugu audiences have not seen something like this in recent times.

Even though the film is based on a shockingly true story, the way it unfolds on the screen isn’t quite convincing and looks too simplistic. The fact that a group of Hyderabadi youngsters pull off a $300 million call centre scam by duping hundreds of Americans with their heavily Indian English accent appears superficial.

Too many cinematic liberties have been taken in showcasing the protagonists’ rise to fame and fortune, leaving the logics behind. Also, the way the film ends on a happy note will leave you puzzled. Bollywood actor Suniel Shetty has been wasted in an insignificant role.

There are a few other characters that don’t create any impact on the narrative. And the investigation carried out by the Federal Trade Commission in the USA is unbelievably limited to making a few phone calls and browsing the computer. Also, FBI and even IRS not lending any support for the FTC’s investigation is not expected in a heist thriller of this scale.

Mosagallu largely suffers from a lackluster and unconvincing screenplay. Crucial scenes involving the actual scam should have been explained in an easier way. The film has been shot well by the Hollywood DP and Sam CS’ background score elevates the proceedings, especially in the last 20 minutes that manage to hold audiences’ attention. Editing could have been sharper. The film takes a while before the actual story takes off. The production values are quite rich.

On the whole, Mosagallu offers only a few thrills. Hyderabadi underdogs using the loopholes in the system and taking on the mighty America and earning millions surely makes for an exciting story idea. However, the film disappoints with the way the logics are given a holiday. You may watch Mosagallu this weekend for the freshness in the world the story unfolds. But we advise you to keep your expectations under check.