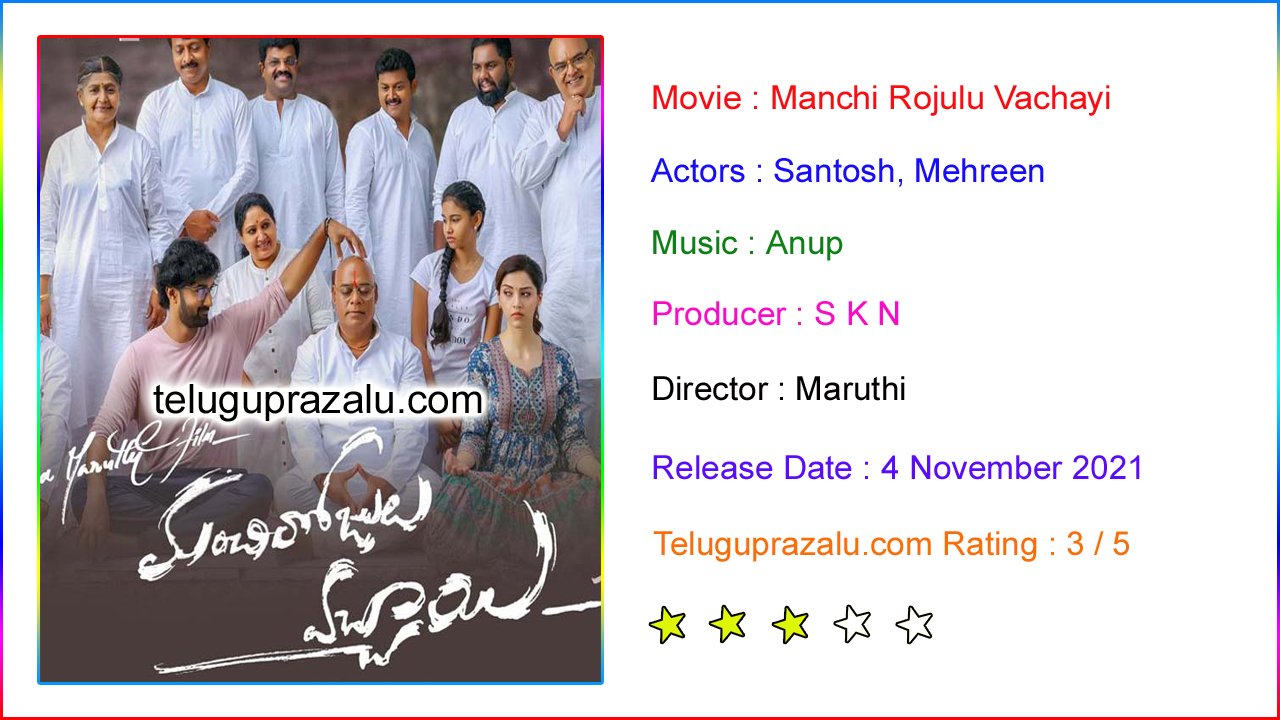 Manchi Rojulu Vachayi is a film that has been promoted a lot in the last few days. It has released on the eve of Diwali and let’s see how it is.

Gopal Tirumalasetti(Ajay Ghosh) is very protective of his daughter Padma(Mehreen). On the other hand, Santu(Santhosh Shoban) and Padma are in deep love. This love story is leaked to Gopal by his friends who also scare him that his daughter’s lover will mess his happiness in life. An upset Gopal starts creating issues in the love story to save his daughter. How will Santu manage his would-be father-in-law and get his blessings is the whole story of the film?

Maruthi is known to make films on simple aspects of life and this time, he chooses fear as his central point. He derives Ajay Ghosh’s character with inner fear and evokes good comedy through this aspect.

Speaking of Ajay Ghosh, he is the center point and the biggest highlight of the film. If not for him, the film would have been quite routine. The way Ajay Ghosh showcases the fear factor and evokes fun-filled emotions is so good to see. Mehreen looks beautiful and does well in her crucial role.

With each film, Santhosh Shoban is improving a lot and he is quite good in this film as well. The first half of the film has good comedy and the manner in which situational comedy is generated through Ajay Ghosh and his friends is also impressive.

Maruthi’s films are based on simple points and the same happens here. The film is based on fear and this conflict point works quite well only till the first half. As Maruthi ran out of the story, he brings in new characters and shows repeated scenes in the latter part.

The film can easily be wrapped up in two hours but close to twenty unnecessary minutes are added and this makes the film look dragged. The Corna angle that is brought in the second half does not create much impact.

Also, the film is ended with just a simple confrontation scene. Ajay Ghosh’s character gets his realization with this said scene and gives a feeling as to why his fear factor is dragged for no reason when such an easy solution is given at the end.

Production values of the film are top-notch. The music and BGM are also impressive. Dialogues are hilarious and the use of daily quotes and slang has been written quite well. The camerawork is simple and so was the production design.

Coming to the director Maruthi, he once again takes a simple story and adds a Covid angle to it. Though he generates good comedy in the first half, he is left with not many conflict points to deal with in the second half.

On the whole, Manchi Rojulochaie is a film that is based on the concept of handling one’s inner fears. The first half has superb comedy and Ajay Ghosh leads the pack with his solid performance. Though there are few comedy scenes in the second half, forced emotions, dragged scenes of Covid, and a simple climax spoil the fun making this film just a passable festive watch this weekend.