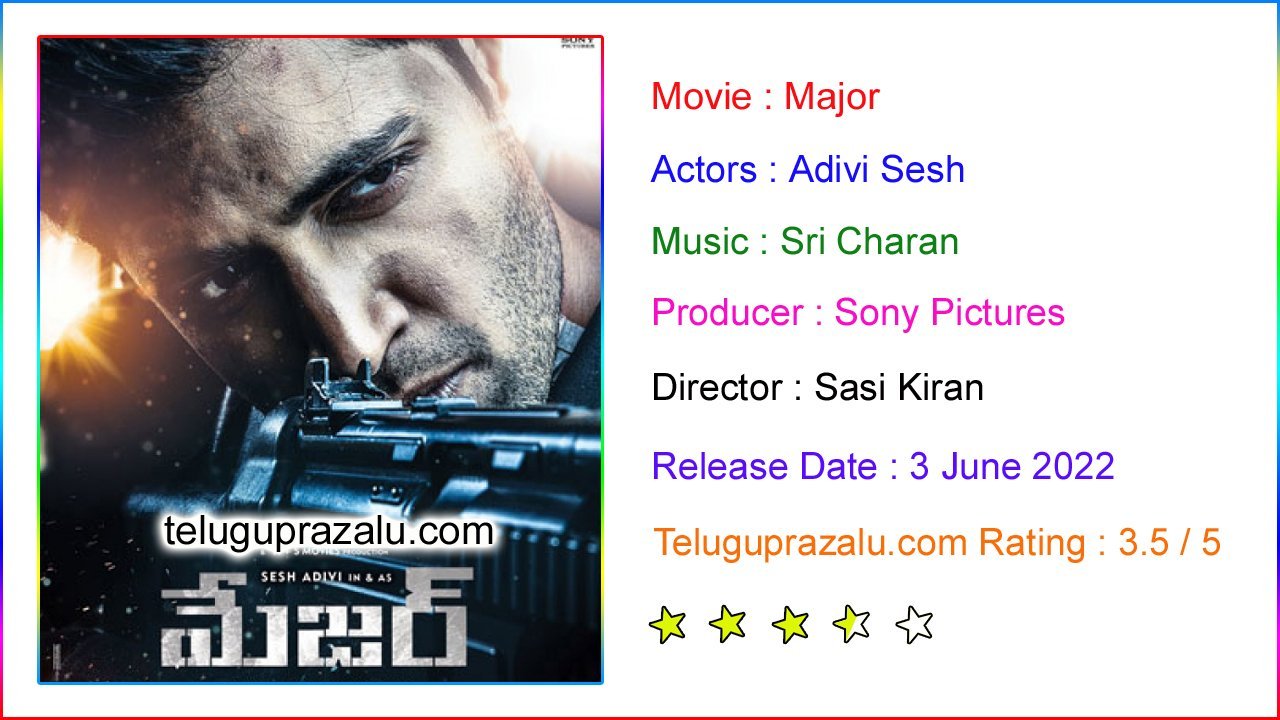 Major is Adivi Sesh’s dream project and has been in the making for two years now. It has finally been released and let’s see whether it lives up to the hype or not.

The story is quite simple and depicts the life of Major Sandeep Unnikrishnan from his childhood. Adivi Sesh plays Major Sandeep and Saiee Manjreka plays his wife. The film showcases how Sandeep Unnikrishnan has a fascination for the uniform, joins the army, gets a call to save civilians during the 26/11 Mumbai attacks, and how he sacrifices his life and makes his country proud.

In the past, there are a number of films that have been made on the Mumbai 26/11 attacks but where Major scores brownie points are the emotions. The story and screenplay are by Adivi Sesh and he gets the emotion behind the soldier’s life right and sets the film in a perfect manner.

When it comes to performance, Major is Sesh’s career-best as he has lived in the role of Major Sandeep. From the school-going boy to the young soldier to the brave warrior, Sesh showcases beautiful transitions in his character. This is the first time Sesh has done such massive action blocks and he is a treat to watch on screen with his handsome looks.

Saiee Manjrekar did not get much scope to showcase her talent in Ghani but here in Major, she gets ample scope and performs beautifully. She has a meaty role in the first half and her chemistry with Sesh is superb. Prakash Raj and Revati as Sesh’s parents bring a lot of emotional depth to the film.

The entire second half is filled with racy action and there are many scenes that give you a high. The manner in which action is mixed with patriotism is quite good. Shobita Dhulipala does a good job in her role and the manner in which her character is linked to the climax is very good.

The film starts on a very slow note. The school day scenes and the aim Major Sandeep Unnikrishnan has in his life to become a soldier should have been established in a better manner.

The first fifteen minutes are slow and there are a few scenes that are quite predictable. Also, more drama should have been added to the husband-wife issues to make the film dramatic. Mumbai police played a key role in the 26/11 attacks and many valiant soldiers lost their life but this aspect has been ignored totally.

Adivi Sesh’s films are known for their solid technical aspects and the same happens in Major too. The production design and sets laid to showcase the Taj hotel are top-notch. The solid camerawork only enhances the visuals and showcases the thrills in a solid manner. Dialogues are good and so were the lyrics. Music by Sricharan Pakala is very good but his BGM is something else.

Coming to the director Sasi Kiran Tikka, he has done a very good job with the film. Without drifting away from the emotions, he showcases what happened in the 26/11 attacks in a detailed and perfect manner. The way he ended the film with an emotional high is the best part of his narration.

On the whole, Major is a patriotic action drama that lives up to the hype. Beautiful performances, endearing drama, and solid thrills are basic assets of the film. If you ignore the slow start, Adivi Sesh leads from the front and takes you on an emotional ride, and makes this film a good watch this weekend. Go for it.