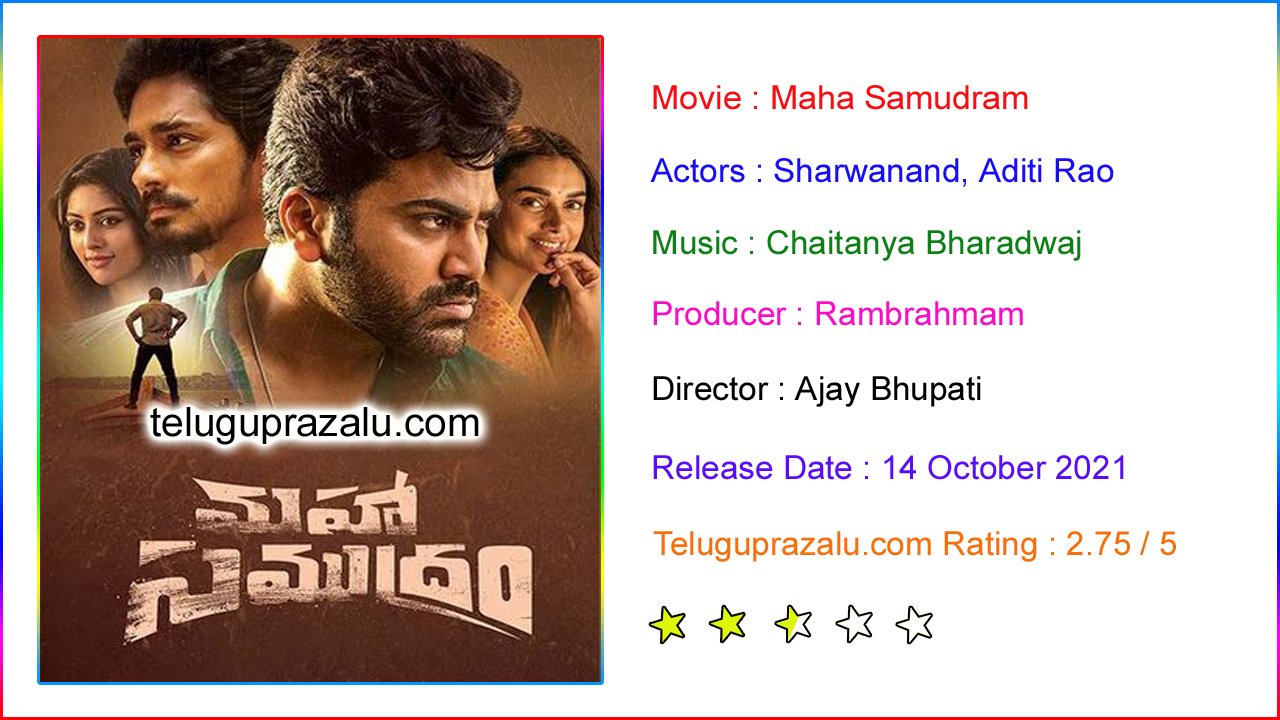 Maha Samudram is a film that has created a lot of hype for itself in the last few days. It has released on a big scale today and let’s see how it is.

The film is set in Vizag and is about two close friends Vijay( Siddharth) and Arjun(Sharwanand). Vijay always has cruel intentions and at a crunch point in life, he leaves his pregnant lover Maha(Aditi Rao) and Vijay in deep problems . If this was not enough, Arjun is forced to become the underworld don in Vizag. When things seem to be going fine with Arjun, Maha and her daughter, Vijay comes back with a vengence to kill Arjun for cheating him. How all this is solved forms the basic story of Maha Samudram.

The production values and tone of the film are very good. The manner in which the film is set in Vizag also looks impressive. Aditi Rao looks good and suits her role well but does not have much to do in the film.

Siddharth makes a strong comeback and is good when he plays the baddie in the second half. Rao Ramesh is best of the lot in his negative role. His look, dialogue delivery and performance are top notch in the film.

Saranya is neat in her role. Anu Emanuel is also effective in her small role. Jagapathi Babu once again impresses as Chunchu Mava. The camera work is quite impressive as the visuals are top notch.

Last not the least, Sharwa does a superb job as Arjun. He shows good intensity in his role and carries the film on his shoulders. All his scenes with Siddharth are handled well.

Maha Samudram has multiple demerits. Ajay Bhupathi’s first film, RX100 had a strong conflict point and that is missing big time in this film. The story chosen is simple and there are not many twists as expected.

Ajay Bhupathi has written terrific characters for each actor and aslo introduced them well. But the drama that is showcased between the char6 in the second half lacks focus and has no depth. Siddharth leaves Vizag and not much is known about him. Jagapathi Babu’s character graph is left incomplete in the end.

The second half is a let down and the way director handled Siddharth’s character looks uneven and lacks clarity. He is also brought back late and when everyone thinks there will be great animosity between the two heroes, things are ended in a jiffy.

Technically, the film is quite strong and has great visuals. The production design needs a special mention and so are the dialogues. Music by Chaitan Bhardwaj is also good and so was his BGM.

Coming to the director Ajay Bhupathi, he has surely not lived up to the hype created after his first film. His canvas, actors, performances, and backdrop are perfect but the needed conflict and drama are missing in the film. When you expect great action, emotion, and confrontation to happen, Ajay loses his control on the film and drags it for no reason.

On the whole, Maha Samudram does not live up to the hype created. The film has an impressive backdrop and scope for solid drama but they are not utilized well. Considering the good star cast and sincere performances, this film can be given a shot this festive season. But go in with your expectations in check.