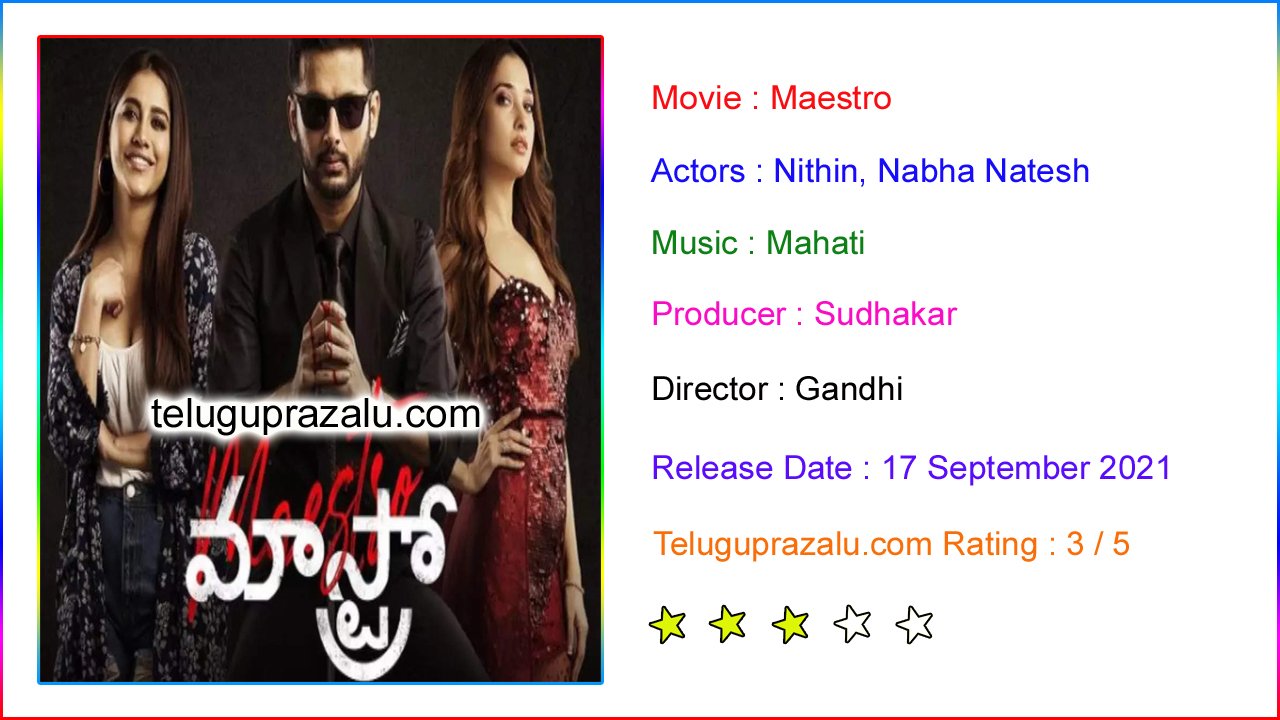 Maestro is a film that many were waiting for eagerly. The film is the official remake of Andha Adhun and is now live on Disney Hotstar. Let’s see how it is.

Arun(Nithin) is a blind man who earns his living by playing the piano in Goa. Impressed by him, a yesteryear actor(Naresh) invites Arun to perform for his wife Simran(Tamannah) on their wedding anniversary. Arun lands at the star’s house only to get involved in a deadly murder. Who has been killed? What will Arun do now? What’s Simran’s role in all this? and where do Nabha Natesh and Jisshu Sen Gupta feature in this thriller? That forms the rest of the story.

Nithin makes a U-turn from his regular romantic dramas and chooses a role where he gets to perform. Nithin as the blind man suits the character perfectly and does not go overboard one bit. There is no heroism in his role but still, Nithin made sure his body language expresses a lot.

Maestro will surely be a big game-changer for Tamanah as she is amazing in a negative role. Right from her looks to the expressions, she has showcased, Tamannah is top class. Her own voice also suits the negative role. All her scenes with Nithin have been executed so well.

The soul of the film is intact and has not been disturbed by the makers. The backdrop of Goa also suits the theme of the film quite well. Nabha Natesh is neat in her small role and shares good chemistry with Nithin. Jisshu Sen Gupta as the cop was okay. Racha Ravi and Mangli get good roles and they do well in their given characters.

Those who have seen the original will surely draw comparisons. Merlapaka Gandhi has directed the film and he has narrated the remake in a faithful manner. But the place where the film drops is the drama quotient. The film originally had gripping drama but the director failed to elevate it properly here.

All the showcased thrills are good but the impact that the original created is missed in the remake. During the climax, the audience is waiting in tension to know the twist and a song breaks out and this drags the end.

Coming to the director Merlapaka Gandhi, he has done a decent job with the remake. He does not experiment much and showcased what was needed. If he would have added more intensity to the drama, things would have been great.

On the whole, Maestro is a faithful remake of Andha Dhun and has interesting thrills. Nithin and Tamannah shoulder the film with their standout performances. All those who have seen the original will surely miss the drama a bit. But those who have not will end up liking this thriller which was some passable suspense elements.