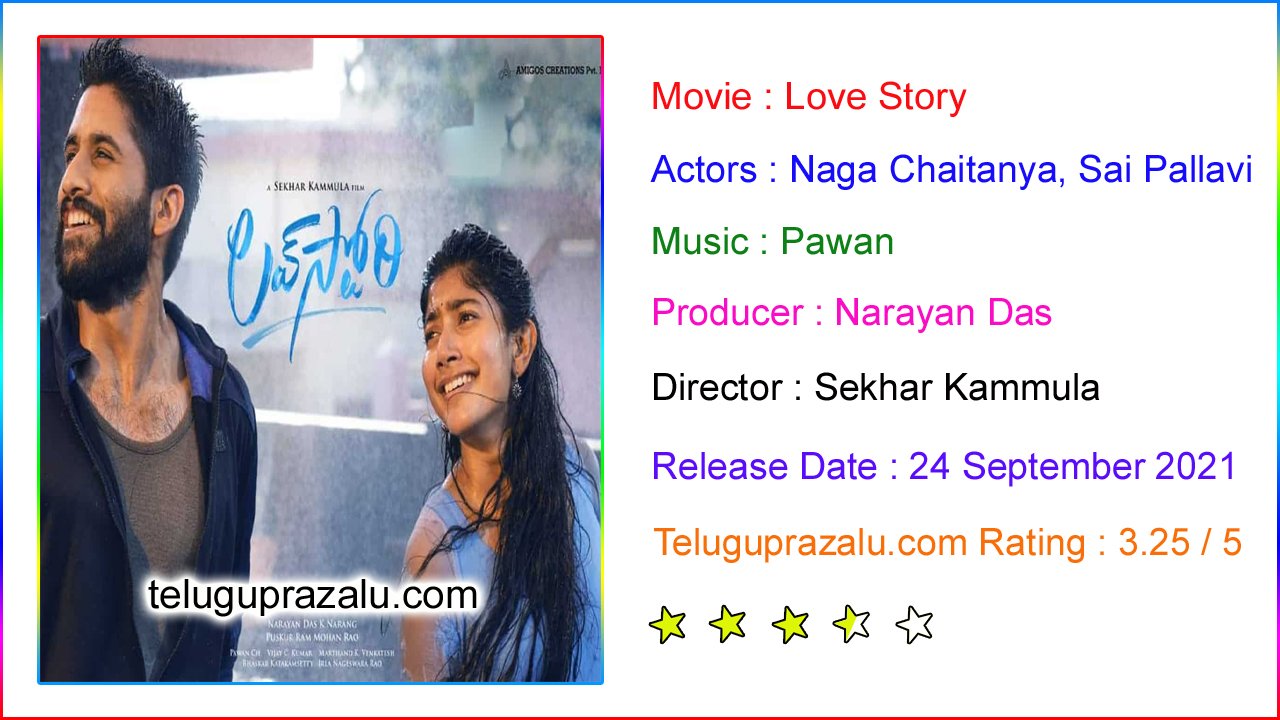 Love Story is a film that was delayed for over a year and a half. After a long wait, this much-hyped romantic drama is finally out on the big screens, and let’s see how it is.

Revanth(Chay Akkineni) is from a lower caste whose only aim is to set up a Zumba academy in Hyderabad. On the other hand, Mounika (Sai Pallavi) is from an upper caste and is trying hard to get a job in Hyderabad. Left with no choice, she joins Revanth’s dance class as a teacher. Sparks fly and the couple falls in love. The rest of the story is as to how the couple faces many issues in their relationship and comes out successfully.

One of the biggest assets of the film is the maturity in the love story. This film is not a regular boy meets girl romance and touches upon some of the darkest issues like caste, gender inequality, and rape.

Sai Pallavi gets a new dimension in her role and is superb as Mounika. The manner in which she goes through turmoil and how it affects the love story is showcased so well by the noted actress. Eshwari Rao is also amazing as Chay’s mother and elevates the proceedings.

Rajeev Kanakala gets a solid negative role and proves his talent big time. Though he does not have many dialogues, he emotes so well with his expressions. Ananda Chakrapani is neat in his brief role. Uttej gets a key character and does well.

Last but not the least, Chay Akkineni is the biggest highlight of the film. He as Revanth gives an award-winning performance and wins your heart with his role. Chay’s transformation as a hard-working youth guy is just terrific and the way he showcases the subtle emotions is amazing. Watch out for Chay’s outburst in the climax.

The entire first half is used to establish the characters and this takes a lot of time. Though the proceedings are breezy, nothing much happens in the love story.

There is a child rape angle in the film and it is addressed only in the last half an hour. If things would have been told from at least the middle of the second half, the drama would have been even better.

The pre-climax is intense but the climax is wrapped up abruptly which gives a mixed feeling. The so-called romantic moments one expects from Shekhar Kammula’s films are slightly missing here.

The music by Pawan CH is amazing and his BGM was even more haunting. The songs drive the narrative and are placed perfectly in the second half. Choreography for Saranga Dariya is just amazing. The production values of the film are very good and the camera work showcases the simple setup in a very good way. Dialogues are amazing and a special mention for the amazing production design.

Coming to the director Sekhar Kammula, he has done a very good job with his romantic drama. His films are light on drama but here, he gives more preference to it and elevates proceedings from the beginning itself. The maturity he showcases in the romance is also quite endearing. Sekhar extracts solid performance from Chay and also addresses key issues of society in a perfect manner, though the climax was rushed.

On the whole, Love Story is a mature romantic drama that addresses key issues like the caste system and gender inequality. Chay Akkineni is the biggest highlight of this film and the dramatic narration makes things interesting. Barring the slow pace, this film has all the trappings to work at the box office and is a sensible film to watch out for.