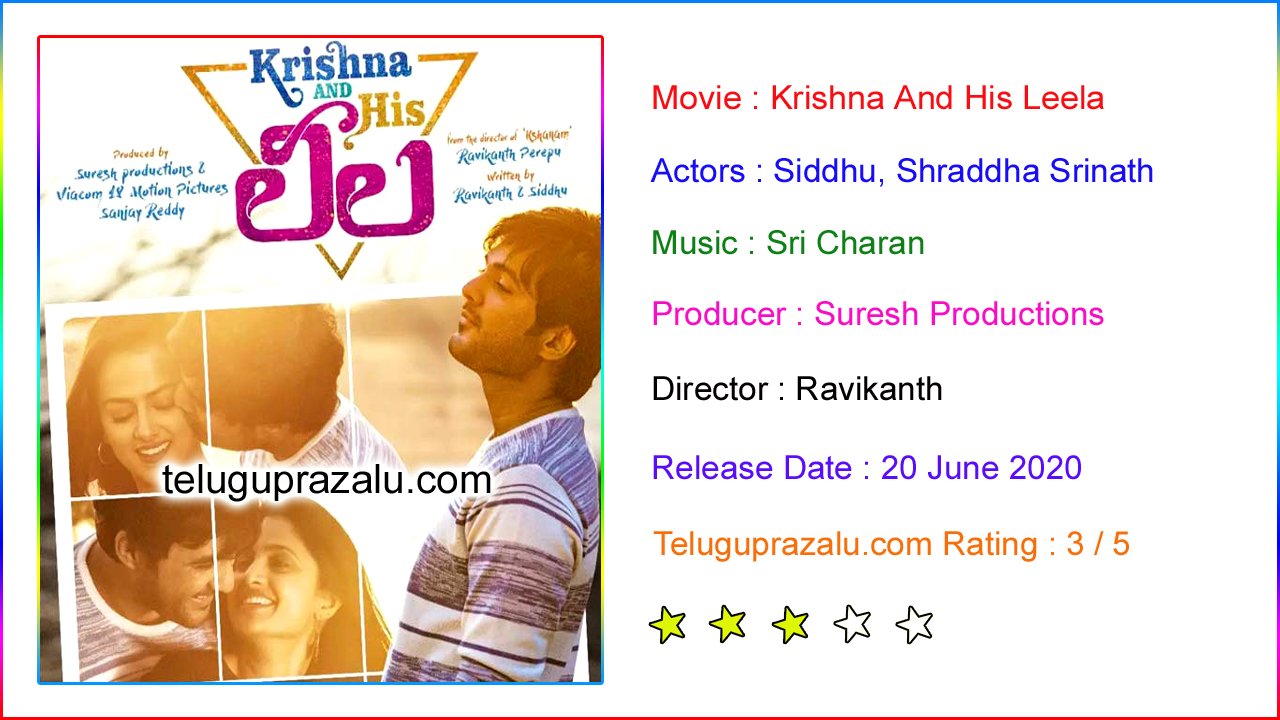 Krishna And His Leela Movie Review

Continuing the trend of releasing Telugu films on OTT platforms, the latest one to come out is Krishna and his Leela. Produced by Rana Daggubatti and directed by Kshanam fame Ravikanth Perepu, the film is now out on Netflix directly. Let’s now see how it is.

The film starts with Krishna (Siddhu Jonnalagadda) breaking up with his girlfriend Satya (Shraddha Srinath). Upset with his life, he decides to move on and falls in love with Radha (Shalini Vadnikatti). But his job leads him to Bangalore and there, he once again meets Satya. Things take such a turn that Krishna starts dating both the girls hiding things from each other. The rest of the story is as to whom does Krishna pick in the end.

Siddhu Jonnalgadda gets an author-backed role and he makes full use of it. Be it his looks or the way he portrays a confused lover, Siddhu has played it with ease. It was not an easy role but the young actor impresses with his act.

As the film was in the making for a long time, Shraddha Srinath looks a bit raw but she does well in her role. Her chemistry with Siddhu is pretty good. Viva Harsha gets a good role and does his part well.

But it is Shalini Vadnakatti who walks away with the cake. She as Radha gets a meaty role and the inexperienced actress does it so well. Be it her emotions, look, or the way she shows subtle changes in her mood, Shalini does it effectively. The conversations between the lead pairs have been written effectively and look endearing in many scenes.

Jhansi and Sampath do their supporting roles well. The songs are never a disturbance and they have been composed really well by Sri Charan Pakala. Also, the manner in which today’s youth deal with their confused relationships has been showcased well.

Though the premise has been set quite well in Telugu nativity, such a subject has been discussed in many Hindi and Telugu films earlier. A boy dating two girls, getting confused, there is nothing special this film showcases in terms of novelty.

The ending could have been explained in a bit better manner but director Ravikanth wraps it up in a quick time and the emotional angle is missed during this time. Also, the pace of the film is pretty slow in many areas.

The production values of the film are top-notch and the solid camerawork make things quite visually appealing. Dialogues are superb and meaningful. Editing is just about okay and so were the costumes. As said earlier, music and BGM are top-notch. The film is a screenplay based and it has been handled well in most parts.

Coming to the director Ravikanth Perepu, he has done a decent job with the film. Though his subject is a bit old, the way he narrates the film without bringing in other unnecessary factors look good. Though the film is slow, his execution has decent moments in both the halves.

On the whole, Krishna and his Leela is a typical romantic comedy that showcases the mindset of today’s youth when it comes to stability in love. Decent romance, good performances, and music are basic assets. On the flip side, the story is a bit routine and the pace is also slow. But director Ravikanth Perepu sets the film quite nicely in Telugu nativity and has narrated it with some feel-good moments making it a decent watch during this lockdown period.