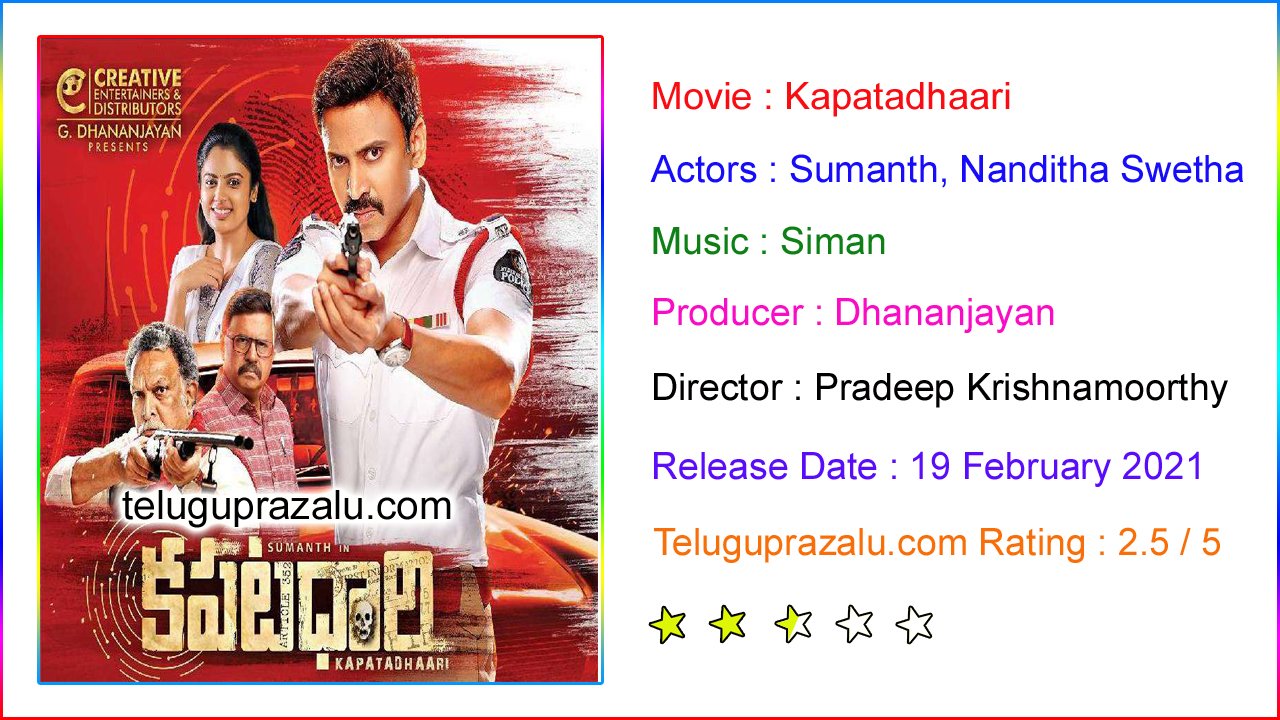 Hero Sumanth’s new film, Kapatadhaari has created curiosity among the audience with its promos. Directed by Pradeep Krishnamoorthy, the film has hit the screens today. Let’s check how it is.

A traffic cop named Gautam ( Sumanth), who is fed up with his routine work decides to enter the crime branch and starts approaching his higher officials. This is the time, three unidentified skulls are found near a metro construction site. While the police department neglects the incident, Gautam takes up the case and starts a secret investigation. Is there any big story behind the three skulls? How are actors like Nassar and Jayaprakash interlinked with the entire plotline? That forms the story.

Sumanth is fit and convincing in the role of a traffic cop. He did his best to bring depth to the proceedings with his settled acting. All his scenes with senior actors Nassar and Jayaprakash have been presented decently in the second half of the film.

The way all the mystery behind the skulls has been revealed neatly by connecting the dots during the last twenty minutes looks good. The actor, who did the key politician’s role is decent in his character.

Heroine Nandita Swetha is cute but her screen time is limited to only a couple of scenes. So is the case with comedian Vennela Kishore as well.

The first half of the film runs at a slow pace with no proper clue on what is happening in the narration. As the proceedings lack soul, the performance of all the actors looks artificial during the course in time.

A traffic cop investigating a crime case misses logic in many scenes. Technically, things should have been showcased in a detailed manner for the audience to understand.

Though the mysterious investigation scenes and the combination scenes between Sumanth, Nassar and Jayaprakash are passable, a few cinematic liberties should have been avoided to bring more authenticity to the narration.

Director Pradeep Krishnamoorthy handled the movie in a decent manner but he should have focused more on the first half by avoiding a few slow-motion scenes. Editing by Praveen KL is okay but he should have chopped the runtime by close to ten minutes.

Cinematography by Rasamathi is good as he presented the night mood shots in a natural manner. Music by Simon K King is nice as his background score brings depth to the proceedings. Production values by Creative Entertainers banner are apt for its backdrop.

On the whole, Kapatadhaari is a mystery thriller which has an engaging narration only during the last twenty minutes. If you ignore the slow and artificial first-half and a few logics, Kapatadhaari ends up as a passable watch during this weekend.