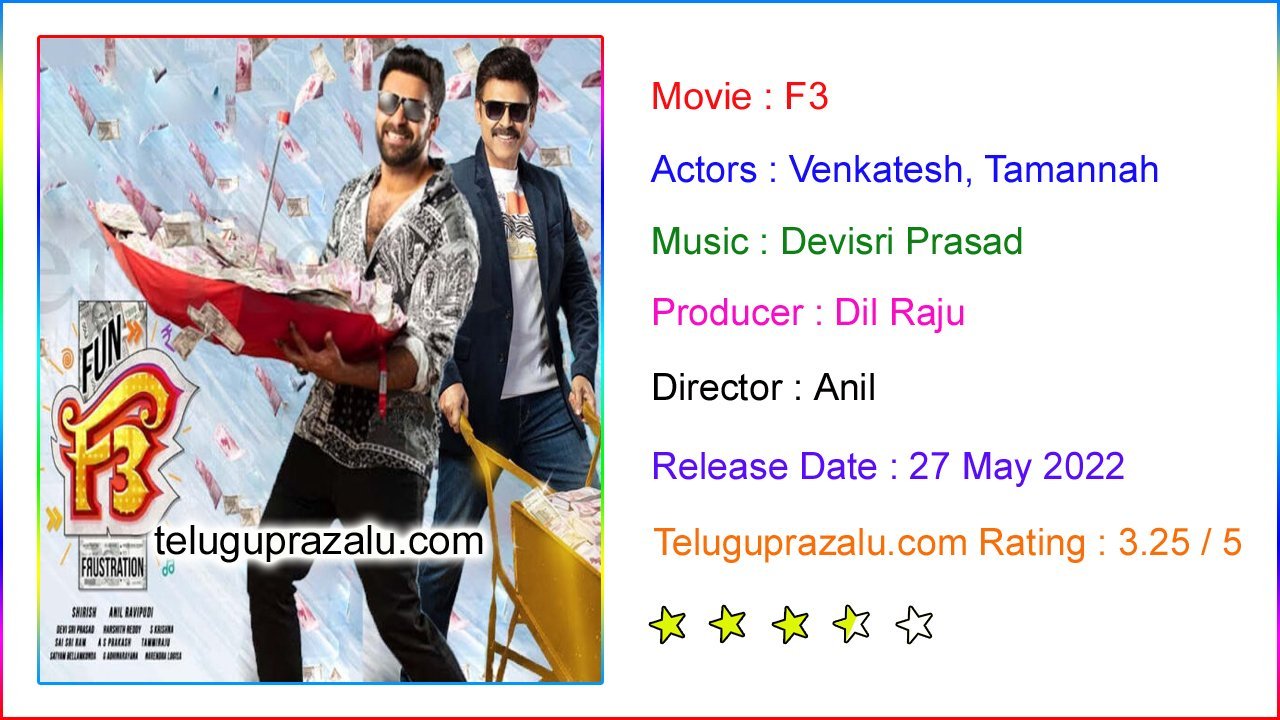 Post the solid success of F2, Anil Ravipudi is back with a new film in the fun and frustration franchise. Starring Venkatesh and Varun Tej, F3 has hit the screens with a good hype. Let’s see how it is.

F3 is not a proper sequel to F2 as only the key characters of F2 have been added. Venky(Venkatesh) and Varun(Varun Tej) are two individuals who are always after money. After failing to make big money, they come to know that a rich businessman (Murali Sharma) is looking for his lost son. So both Venky and Varun decide to go in as the lost son and inherit the crores of property. How will they do all this and what happens to them in the due course of time is the basic story of F3.

One of the biggest assets of the film is the basic entertainment quotient. It has been quite some time since we have seen such a clean comedy which everyone can watch with their families. F3 is filled with good entertainment which is unleashed at regular intervals.

Venkatesh was hilarious in F2 and he goes a notch higher in F3. His comedy timing is top-notch and the manner in which he lets go of his star image and becomes a character and evokes comedy is superb. He as the man with night blindness is so good in F3. Sonal Chauhan gets a good role after a long time and she sizzles.

Varun Tej is a very underrated actor and shows what he is capable of in F3. It is very hard to evoke comedy but Varun does it with so much ease in F3. He as the stammering youngster creates superb chemistry with Venkatesh. Tamannah and Mehreen also get good roles in the film and do their best.

After a long time, Sunil gets a meatier role and he also evokes good laughs. Ali also makes a comeback with a crazy character and does so well in his limitations. Murali Sharma, Annapurna, Pragathi, and the F2 gang are quite good in their roles.

The climax and the way top stars are mentioned in a funny manner will impress the audience. The songs are placed well and onliers are pretty good.

Right from the day the film was launched, the makers have stressed the fact that there will be no logic and entertainment will be the main focus. From the first scene onwards, logic goes for a toss and there are so many issues in the script as scenes are written conveniently.

The first fifteen minutes of the film is quite slow as nothing happens during this time. The way Murali Sharma and how he is looking for his lost son is brought in a sudden manner. These scenes do not sink in the film but comedy saves the show.

F3 is a film that will not go well with a section of the class audience as they can find the scenes and situations quite silly to digest. They will find the comedy over the top and loud.

Music by DSP is good and all the songs are placed well in the setting. BGM is good and so was the production design. Dil Raju has spent a lot on the film and this shows on screen. The camerawork is amazing as it gives importance to so many actors in the frame. The length in the second half should have been trimmed a bit.

Coming to the director Anil Ravipudi, he has done a good job with the film. The way he has narrated F3 speaks of his talent. Taking characters from F2, he has added more fun to them and gave the backdrop of money. The way comedy is generated through each character makes the film hilarious in several scenes. In a way, Anil Ravipudi did not concentrate on the story or logic and only aimed at giving fun to the audience and he succeeded in it.

On the whole, F3 is a full on masala film with good entertainment packed at regular intervals. Though the story, logic, and emotions go for a toss, the presence of multiple stars and fun generated keeps the audience engaged and makes this film a good family watch this weekend. Just keep your expectations in check and enjoy this timepass comedy.