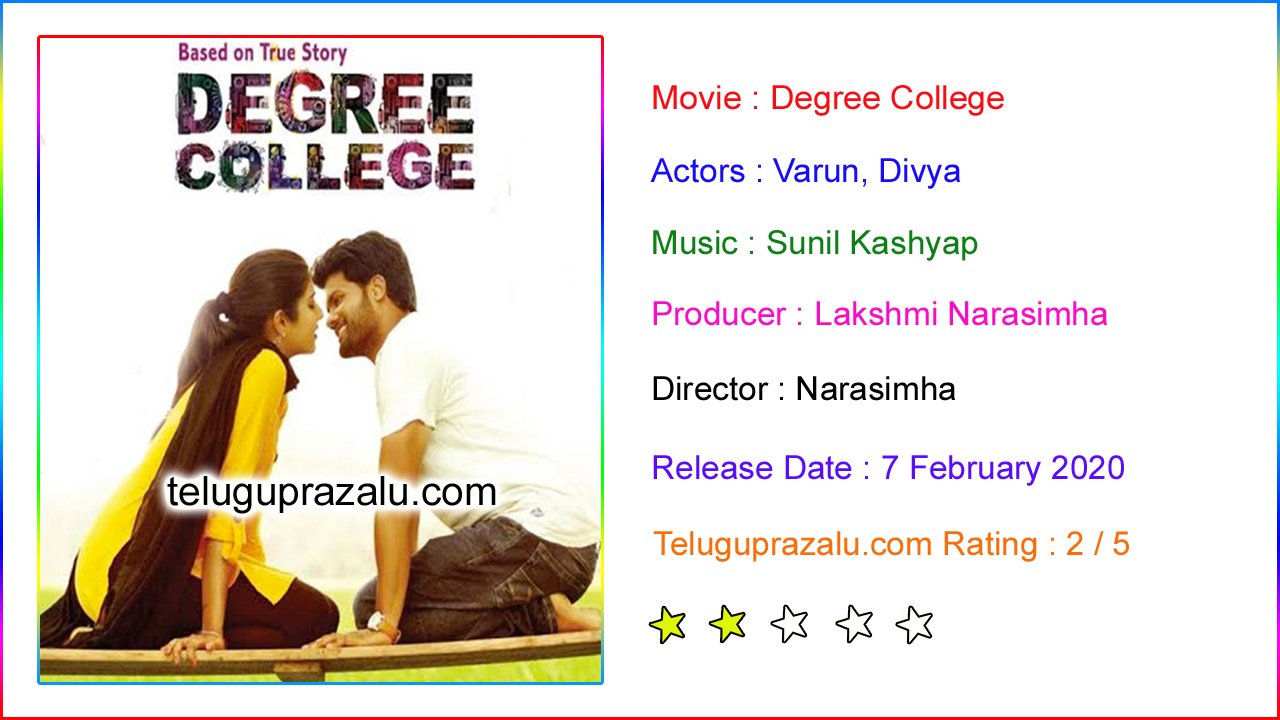 Noted director, Narasimha Nandi, who is known for making social-oriented films is back with a youthful romantic drama titled, Degree College. The film has hit the screens today. Let’s see how it goes.

Set in the Telangana backdrop, Shiva(Varun) is a guy from the lower caste who falls for Parvathi (Divya Rao), a reputed cop’s daughter. As Parvathi’s father is against their love, the couple elopes and get married. After a lot of effort, Parvathi’s father brings her back home. What will the further proceedings lead to? Will Shiva and Parvathi reunite again? What will be the end of this love story? To know that, you have to catch the film in the theaters.

Heroine Divya Rao is the main highlight as she performed her strong and daring role quite impressively. Not only she looks cute but has a commendable screen presence. Her dialogue delivery and ease in Telangana slang are things to watch out for in the movie.

Hero Varun is decent in his role and has a good voice but he needs to improve a lot acting-wise. A few romantic scenes and one intimate song between the lead pair will impress the targetted youth. The person, who acted as heroine’s father is good in his negative cop role. All the other artists, who acted as hero and heroine’s friends were okay in their given roles.

The biggest minus point of the film is that it is dead slow and has an overstretched narration. The main point of the film also lacks freshness as we have seen the same kind of issue addressed in many films recently. The intimate scenes and romantic track between the lead pair are heavily inspired by Arjun Reddy and lack novelty.

After an interesting opening scene featuring the heroine and hero, everyone expects that the director is going to deal with something new. But as a huge disappointment, the narration falls flat soon after the film shifts to the college backdrop in Warangal. The climax portion is totally illogical and irritates the audience.

Director Narasimha Nandi’s idea of making a film on social inequalities is good but in the recent past, we have seen similar concepts in films like Dorasaani and Dhadak. Leaving the story aside, Narasimha Nandi’s screenplay and narration are painful. Instead of dealing with the story in a regular way, he should have inserted a few twits.

Editing work by KV Nagireddy is okay but he could have focused on keeping the runtime in the limit. Cinematography by Muralimohan Reddy is okay to an extent. Music by Sunil Kashyap is good as the background score and one montage love song are nice. Production values for this low budget film are okay.

On the whole, Degree College is a message-oriented social drama that exposes the inequalities in society. Heroine Divya Rao’s acting and a few romantic scenes between the lead pair are okay but the slow-paced narration, lengthy runtime and lack of proper narration make the film a tedious and disappointing fare at the box office.