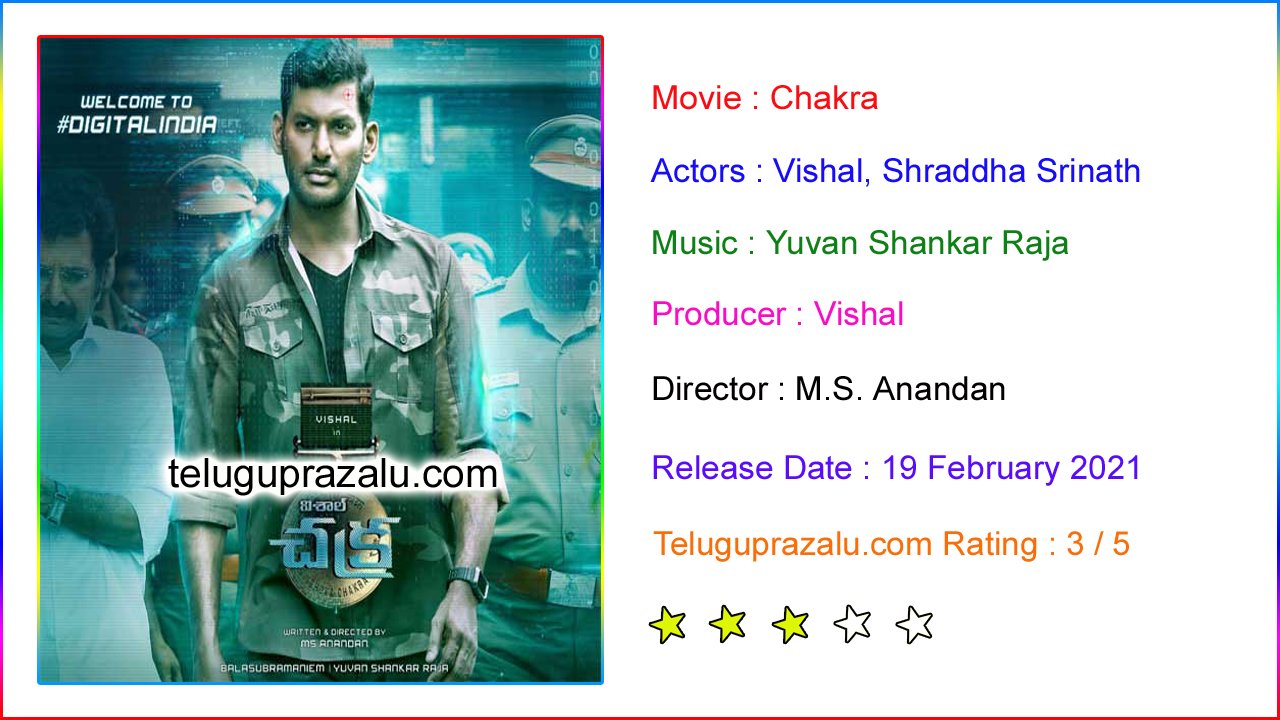 Chakra, a film produced by Vishal Film Factory under its own banner as Vishal Hero, was released today. Let’s go into the review and find out what this suspense thriller looks like.

On India’s 73rd Independence Day, two mysterious criminals target old people’s residences and pull off as many as 50 robberies at various places in Hyderabad within a couple of hours. Police Inspector Gayatri (Shraddha Srinath) is assigned to solve the case. She is later joined by her boyfriend and military officer Chandru alias Subhash Chandra Bose (Vishal).

Why does Vishal join the investigation? How is the title Chakra connected to Vishal and the story? What has cyber crime and hacking got to do with the serial crimes? How did Vishal catch the criminals and solve the case? All these elements form the rest of the story.

Roles like these suit Vishal well and he does his part neatly. He is also good in the action episodes. It’s refreshing to see Shraddha Srinath as a badass cop, a welcome shift from her usual girl next door roles. There is yet another actor who is the main surprise package of Chakra. It wouldn’t be appropriate to reveal the surprise and spoil your fun. Rest of the supporting actors do their job well and help the story progress.

The cyber crime backdrop and pulling off a major heist through hacking in this digital age, the crucial ‘Dial Your Help’ utility service app episode, the game of chess and how Vishal connects all these dots altogether give an impression that Chakra is a cleverly conceived thriller.

Chakra appears to be an intelligent investigative thriller. But unfortunately, the film does have its share of loopholes. The fact that a military officer comes down from New Delhi to Hyderabad to solve such a high-profile case looks illogical, even though the director tries to convince the audience once through Shraddha Srinath’s character.

Cinematic liberties have been taken to unnecessarily elevate Vishal’s heroism at the cost of making Shraddha Srinath’s and the DGP’s characters look pale. In fact, it wouldn’t have made much difference in the story if Vishal is shown as a cop instead of a military officer.

Barring the above-mentioned logical loopholes, writer-director MS Anandan comes up with an engaging idea and executes it quite well, without adding any unnecessary frills like songs or separate comedy tracks. The film doesn’t rely much on the lead actors’ performances, but it’s MS Anandan’s racy screenplay, especially in the second half that’s filled with a few twists and turns, which leaves the audiences engaged till the end.

Senior lensman Balasubramaniem’s cinematography is adequate and it particularly comes alive in fight scenes shot at night. Editor Thiyagu does a neat job too, keeping the film’s run-time short and the screenplay racy. However, the flashback scene featuring Vishal and Shraddha Srinath looks unnecessary.

On the whole, Chakra makes for an engaging watch, but with a few red herrings. Even though the film is an intelligent thriller, certain forced cinematic liberties cause a few loopholes in the narrative. However, the cat and mouse chase-like investigative track between Vishal and the film’s antagonist will make up for the shortcomings. You may check out Chakra this weekend if you are a lover of investigative thrillers.