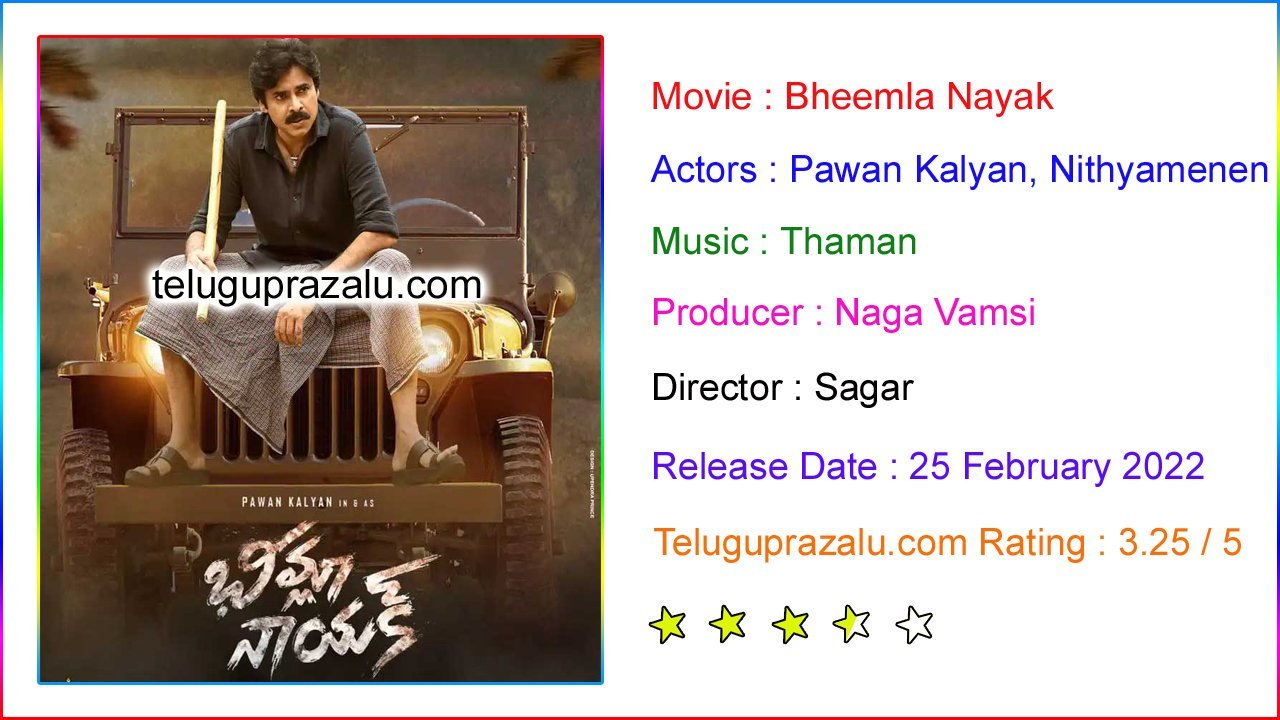 Bheemla Nayak is one of the biggest releases post the third wave of Covid. The film directed by Sagar Chandra has been released in a big way in the Telugu states. Let’s see whether it lives up to the hype or not.

The film starts with the arrest of a wannabe politician Daniel Sekhar (Rana) at a local check post. He throws all sorts of tantrums at the police station and this does not go well with the SI Bheemla Nayak (Pawan Kalyan). This small case goes on to become severe and a huge tug of war erupts between Bheemla Nayak and Daniel Sekhar. What happens next and who wins this huge clash of the egos is the whole story of the film.

Pawan Kalyan is known for his attitude and he shows it in full throttle in Bheemla Nayak. He is subtle at times and emotes with his eyes. But Pawan also brings out the fire and goes all out when it comes to emotional outbursts during the second half. His body language as a cop and the way he interacts with Rana is just superb and Pawan is in full command here.

Rana is yet another biggest asset of Bheemla Nayak. No one could have performed the role of Daniel Shekar the way Rana did. From the first scene to the last, Rana is stunning. Especially his attitude and the way he provokes Pawan Kalyan is shown superbly by the actor. In a way, this is the best performance of Rana so far and he never gets bogged down by a towering personality like Pawan Kalyan.

Nithya Menen gets a good role as Pawan Kalyan’s wife and is effective. Samyukta Menon is also decent as Rana’s wife. Samuthirakani gets limited screen presence but was good in his role. Thaman is yet another highlight of the film as his songs and BGM take the film to another level.

More than anything, what’s keeps the audience engaged are the powerful scenes between Rana and Pawan Kalyan. They are the heart of the film and eat up most of the screen time. The fights are also nicely choreographed and will be loved by the masses.

Firstly, Bheemla Nayak is a serious confrontation drama and has no scope for entertainment. In this regard, the fans might get disappointed a bit. Also, after the initial first twenty minutes, the film becomes slow as Pawan Kalyan looks quite subdued in his role.

Things pick up only in the second half as nothing great happens in the first part. Rana’s character is shown as egoistic person but his character graph is not handled properly as the film progresses in the latter part.

Samyukta Menon’s role is quite key in the climax of the film but the manner in which she changes the whole story twist lacks a bit of logic. Also, the hit title song has not been choreographed well and fans will be disappointed for sure with the taking.

Thaman’s music is one of the biggest assets of the film. He has given super hit songs and they have been used perfectly and enhance Pawan’s heroism. Thaman’s BGM is quite good especially when the Pawan-Rana banter happens, it elevates the film to another level. Dialogues by Trivikram are an added bonus to the film. There are a lot of punches and the star director induces daily life words in the best way possible. Rana and Pawan have been styled nicely.

The film is a remake and credit should go to the production design for re-creating a new setup for Bheemla Nayak. The art work, costumes, and production values are top notch. Editing is perfect and though the film is long, it does not bother you.

Coming to the director Sagar Chandra, he makes full use of his big opportunity and delivers a good product. He does not play with the remake much and keeps its soul intact. The manner in which he has showcased the Pawan-Rana animosity is the best part of his narration. He gives good importance to emotions and extracts impressive performance from all his actors.

On the whole, Bheemla Nayak is an intense action drama that has superlative performances by Pawan Kalyan and Rana. The mass elements, confrontation scenes, and solid songs are placed nicely into the setup. Barring the slightly dull pace in the first half, this film has enough elements to click at the box office and will bring back the lost glory of big screen entertainment. Go for it.