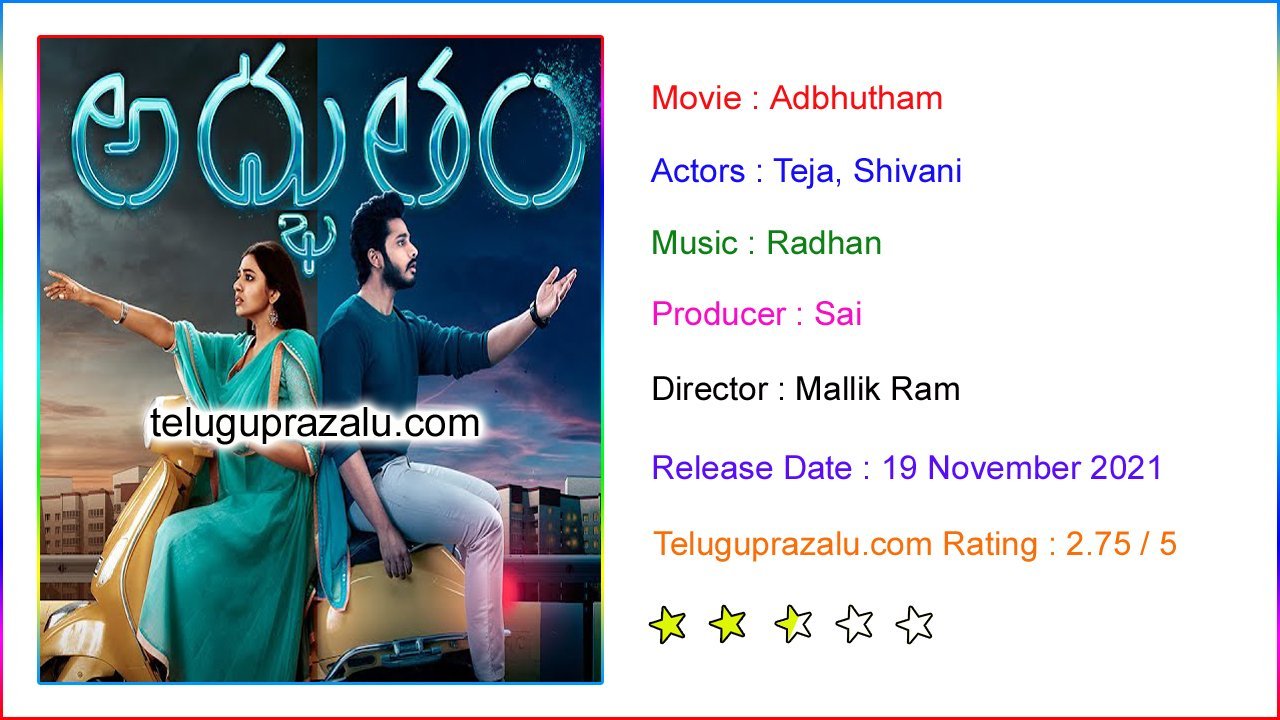 Adbhutham which has Teja Sajja and Shivani Rajasekhar as the main leads. The film is now streaming on Disney Hot Star and let’s see how it is.

Surya(Teja Sajja) is upset with his life and decides to end it by committing suicide. But at the last minute, he messages his own number saying that no one is responsible for his death. But this message reaches a girl named Vennela(Shivani Rajasekhar) in 2014. Amazed by this, Surya starts talking to Vennela on phone and falls in love with her as time passes by. How will two people in different worlds and time zones meet each other? That forms the story.

This is Teja Sajja’s debut film but has been released now. He looks handsome in his role of Suriya and gives a sensible performance. In all his scenes with Sivaji Raja, who plays his father, Teja emotes quite well.

Shivani Rajasekhar is also neat in her role. Though she looks a bit naive at the beginning of the film, she does well as the film moves on. She as the homely girl has a decent screen presence and does well. Comedian Satya does a decent job as Suriya’s sidekick.

The first half of the film is decent as the way the main point in the story is established. The urge that the lead pair shows to meet each other has been executed well.

The film has a decent subject but is spoilt with dull narration. After a decent first half, the film goes down a bit. Instead of revealing the truth behind the phone call connection, the makers drag the film with a boring love story.

Also, there is not much emotional touch in the film as key characters look a bit forced. The manner in which the lead pair react to key situations of connecting from different time zones should have been revealed in a more exciting manner. The film also has the same story and premise as the Telugu movie Playback.

Though the film is made in 2016, it looks fresh and has good production values. Music is decent and so was the BGM. The dialogues are good and so was the production design. The editing could have been better as the film needs to be trimmed at least ten minutes.

Coming to the director Malik Ram, his story is just okay. Though the basic thread is good, the storyline and the way he executed the film were dull. A good scene is marred by a very predictable and over-dramatic situation.

On the whole, Adbhutam has a good premise and decent first half. Teja Sajja and Shivani do well in this film but a slightly dull second half and Deja Vu factor of the story makes this film a passable watch this weekend.