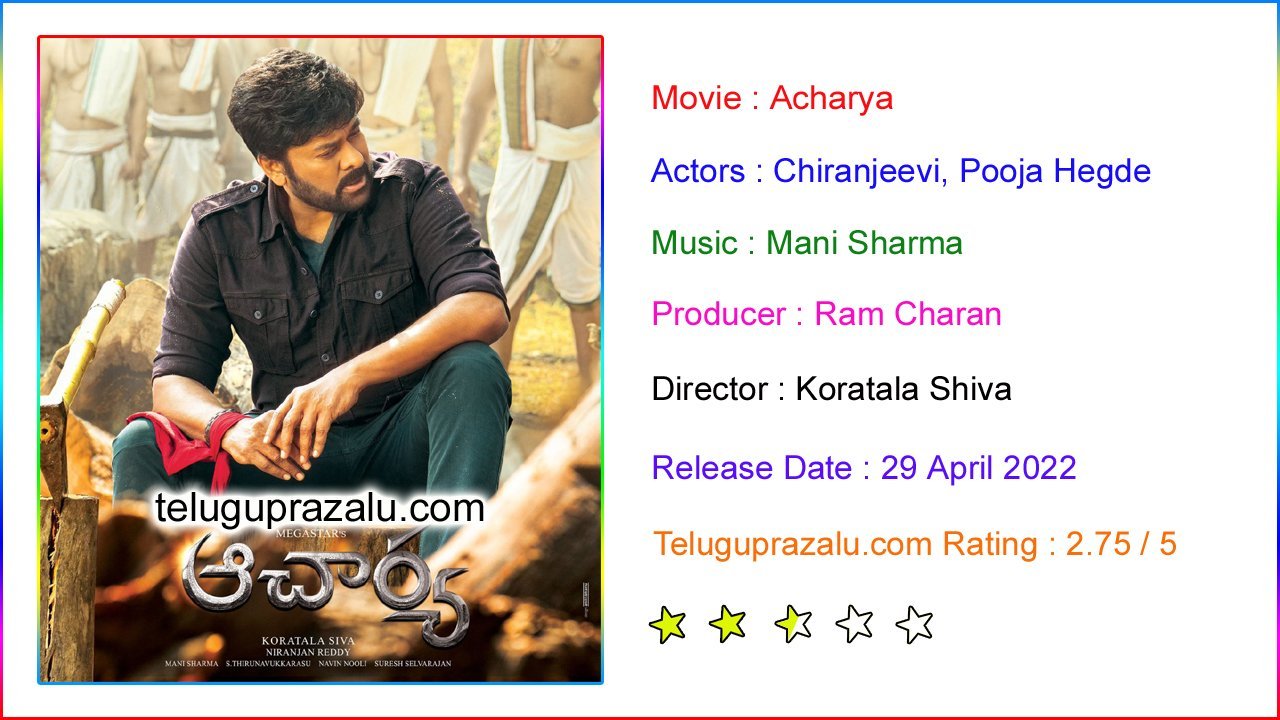 Acharya has been in the making for the last three years thanks to Covid. The film starring Chiranjeevi and Charan has hit the screens today. Let’s see whether it lives up to the hype or not.

The film is based in the temple town of Dharmasthali. Basava(Sonu Sood), once a disciple of the temple is now doing all sorts of illegal activities in the temple town. In comes Acharya(Chiranjeevi) and starts a revolt against Basava. But his arrival at Dharmasthali has a purpose that is related to Siddha(Rama Charan). Who is this Siddha? What’s his connection with Acharya? and who will save Dharmasthali? To know the answers, watch the film on the big screen.

It has been quite some time since we have seen Megastar Chiranjeevi on screen. But his charisma, screen presence, and intensity in his eyes are intact and he gives a solid performance. Even at this age, Chiru dances, fights, and mouths dialogues in a superb manner. His emotional performance is the biggest highlight of the film.

With each film, Ram Charan is only improvising and the same is proved here with Acharya. He, as Siddha, a boy from Gurukul, looks peaceful but transforms into a mass avatar by the end of the film. The scenes between Chiranjeevi and Charan are executed superbly by Koratala Siva and are the main highlight of the second half.

Pooja Hegde gets a limited role but looks cute in the Indian avatar. Her chemistry with Ram Charan is decent. The grandeur in the film is quite good as the sets and action blocks are good. The Bhale Banjara song will be a feast for the fans and comes at a perfect time in the film.

One of the biggest drawbacks of the film is the routine storyline. Apart from the backdrop of Dharmasthali, the basic premise is the same good versus bad formulae and showcases nothing new.

The first half has no great moments and this is where the film goes for a toss. Chiranjeevi, who is known for his energy, is showcased in a subdued manner and is only in his elements for the songs and fights. Just to give hype to Ram Charan’s character, he has been kept quite dull and gets his due only in the climax. The climax also looks rushed and forced and has no enough meat for Chiranjeevi to go all out.

Yet another big drawback of the film is the lack of a strong villain. There is no strong conflict point for the hero address to and the weak villain makes matters worse. Sonu Sood has a soft image post-Covid crisis and that is the reason he does not look menacing. Jisshu Sen Gupta also does not create any effect.

Music by Mani Sharma is decent but his BGM could have been better in a few areas to elevate the heroism. One of the major attractions of Acharya is the temple town Dharmastahli. Most of the film happens in this setup and one cannot believe that the entire temple town is a set. The credit should go to art director Suresh for doing a splendid job.

Coming to the director Koratala Siva, he has done just a passable job with the film. Koratala has elevated the scenes between Chiru and Charan in a superb way and pleased the fans. But in all this, the taut storytelling, which is his forte, goes missing. Koratala’s writing is quite weak as there is not enough drama to elevate the proceedings. Most of the scenes look forced and the climax is the biggest example.

On the whole, Acharya is a temple town drama that has some good father-son moments. The backdrop is decent but the narration is insipid and does not gives the audience a high. Storywise too, there is no novelty and the electrifying drama one expects from a Koratala film is missing. The regular audience will get disappointed with Acharya but Chiranjeevi and Charan make the fans happy, with their chemistry and solid screen presence.