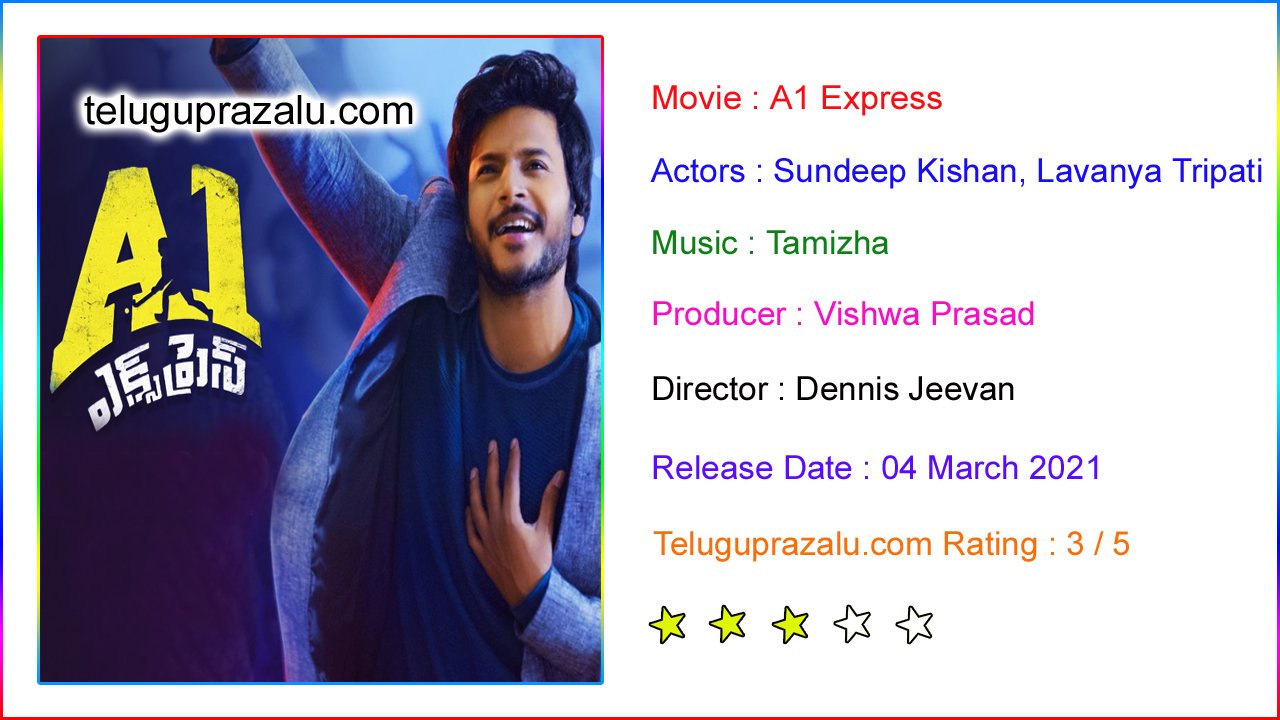 A1 Express is a film that has been promoted a lot in the last few days. Starring Sundeep Kishan and Lavanya, this film has hit the screens today. Let’s see how it is.

The film is set in Yanam and is about a hockey ground which the sports minister(Rao Ramesh) is trying to sell. In comes Sanju(Sundeep Kishan) to Yanam and starts wooing the local hockey player Lav(Lavanya Tripathi). A tragic turnaround of events happen and Sanju joins the fight to save the ground. Who is Sanju and why did he come to Yanam? To know that, you need to watch the film on the big screen.

The film is not entirely based on hockey and has good emotions. The stories connected to the ground and how the game of hockey is made the main theme is quite interesting. Though the film is a remake, there are many changes done and all of them work well.

Sundeep Kishan is the life of A1 Express and has upped his game in a big way. He is a superb actor and this film gives him ample scope to perform and showcase his allround skills. Sundeep as Sanju is lovable, has a solid scren presence and emotes quite well. Looks wise too, he has worked hard and is a complete package in this film.

Rao Ramesh is also yet another biggest asset of the film. His dialogues on the sports infrastructure and satirical behaviour in the film evoke good laughs. Mahesh Vitta, Khayyum, and Raghu Babu do well in their roles. Murali Sharma as the head coach does what is expected.

Last but not the least, Lavanya Tripathi looks beautiful and is cute as the hockey player. She looks natural in the film and ups the game in the songs. Her chemistry with Sundeep is also very good. The comedy generated is decent. Rahul Ramakrishna and Priyadarshi are impressive in their emotonal roles.

Though it is not much of a drawback, the story takes a lot of time to enter into the main script. The directors uses many scenes to establish the characters and the main story is unleashed only before the pre interval.

The coach of the opposite team looks weak and a better actor should have been chosen. Becuse of this, the intensity in the game in the climax slightly goes down.

Production values of the film are impressive. The camera work is pretty good as it showcases Yanam, the hockey matches and drama in a good mood. Yet another advantage is the BGM done by Hip Hop Thamiza. His score in the interval scenes and climax was solid. Sundeep Kishan has been styled well in the film. Dialogues are good and so was the production design showcasing the game of hockey.

Coming to the director Dennis, he has done a good job with the film. After seeing the promos, many will think that the film will be out and out based on hockey. But the drama sorrounding the game is highlighted and this looks good. There are a few predictable scenes and storyline is simple but the young director has showcased the film in neat and apt manner.

On the whole, A1 Express is a sports drama that has engaging drama. Comedy, romance, and action are unleashed in equal doses to keep the audience entertained. Though the story looks predictable, the narration is impressive and does not bore you much. If you ignore the slightly slow start, this film ends as a simple and breezy watch this weekend.