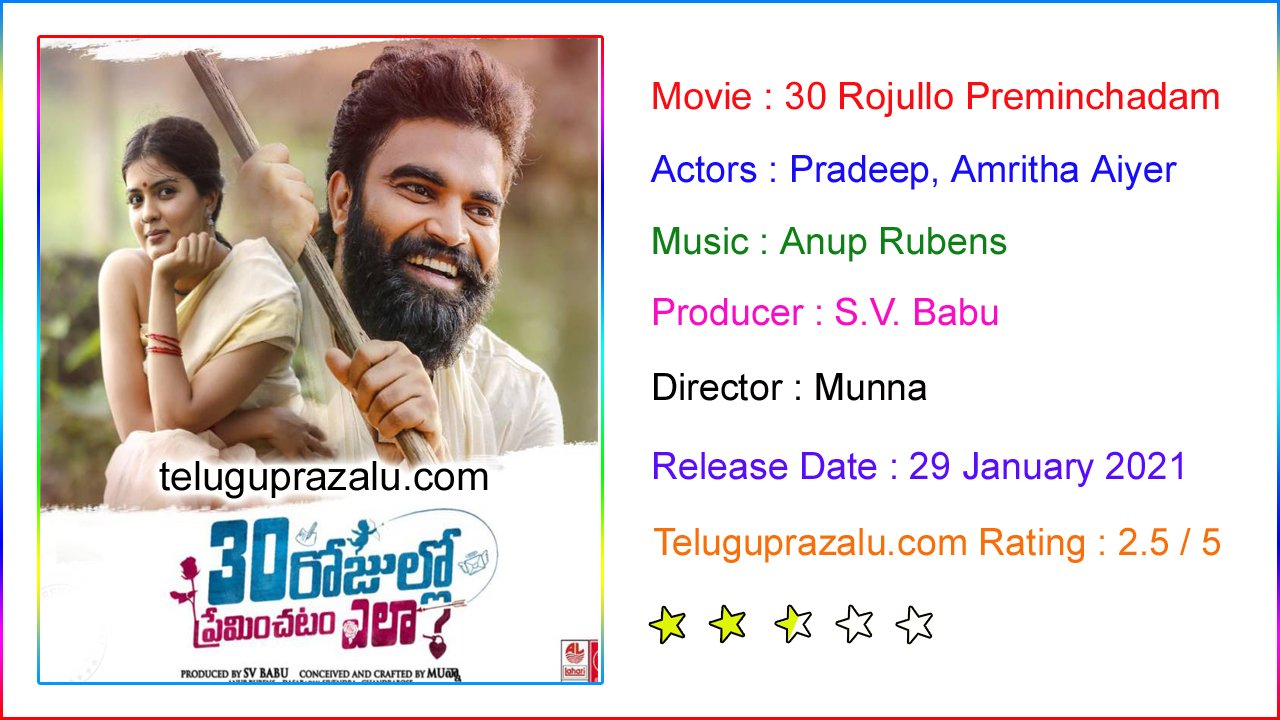 30 Rojullo Preminchadam Ela is a film that was being awaited for a long time because it marks the debut of Pradeep Machiraju as the hero for the first time in his career. The film is finally out in the theatres after a delay and let’s see how it is

The film starts in the pre-independence era and showcases a couple (Pradeep and Amrutha Iyer) who love each other. But sadly, they die in dire circumstances. Things change and the couple is reborn as Arjun and Akshara in 2020. They join the same college and hate each other. But through a big twist, their bodies get interchanged. What is that twist? Why did they get interchanged? What’s the whole reincarnation theme? That forms the rest of the story.

As the film marks the debut of Pradeep as a full-fledged hero, let’s talk about him first. The anchor turned actor is quite impressive in his debut film. He dances well, has good screen presence, and emotes nicely. Pradeep is good as the village guy and also does well as the young college-going youth.

Heroine Amrutha Iyer is quite good and is supremely talented. She shows glimpses of her brilliance in the emotional scenes and if handles her career well, she can go a long way ahead. For a change, Hema gets a good role and is neat as hero’s mother.

Viva Harsha, Bhadram are good with their comedy. Some college teasing scenes featuring the comedians and lead pair work well in the first half. Posani does well in his role and some visuals in the first ten minutes are good.

One of the biggest drawbacks is the main twist that is revealed during the break time. It is weird and silly. But at least the twist that is showcased should have been narrated well going forward. Things become so lousy after the first half that the story, narration, and logic go for a toss.

The super hit song, Neeli Neeli Aakasam comes in the first five minutes itself but the love story is not given time to blossom. The director should have narrated the love story in detail to give the needed effect. But he loses the golden opportunity and wastes time in the current time zone with silly comedy and unengaging scenes that derail the film.

The film has family emotions in plenty but they do not click one bit. An entire song is dedicated to the hero and his mother but this does not gel well and looks way too forced. The film fails big time in the emotional department as major family emotions do not click. More depth in writing should have made things better but things get spoilt in the second half.

Production values of the film are pretty good and especially the camera work is very good. The lyrics are good and the music is superb. Anup Ruben has done an amazing job with his score and is a major attraction. Editing is pathetic as close to 15 minutes in the film should have been chopped off. Dances are impressive and so was the production design.

Coming to the director Munna, he has done a disappointing job. His story idea is good but the major twist he chooses looks weird. But at least, he should have chosen proper logic, emotion, and pain in the love story to elevate that twist. He should have at least spent time on the period love story to make things better for what will be showcased in the second half. But that does not happen at all.

On the whole, 30 Rojullo Preminchadam Ela is a film that fails to live up to its hype. It starts off well but the unengaging scenes, dragged narration, and forced emotions take a toll on the viewer. Pradeep passes with full colors as a solo hero and reaches the expectations. But the film does not hold your attention and ends as a below-par watch this weekend.