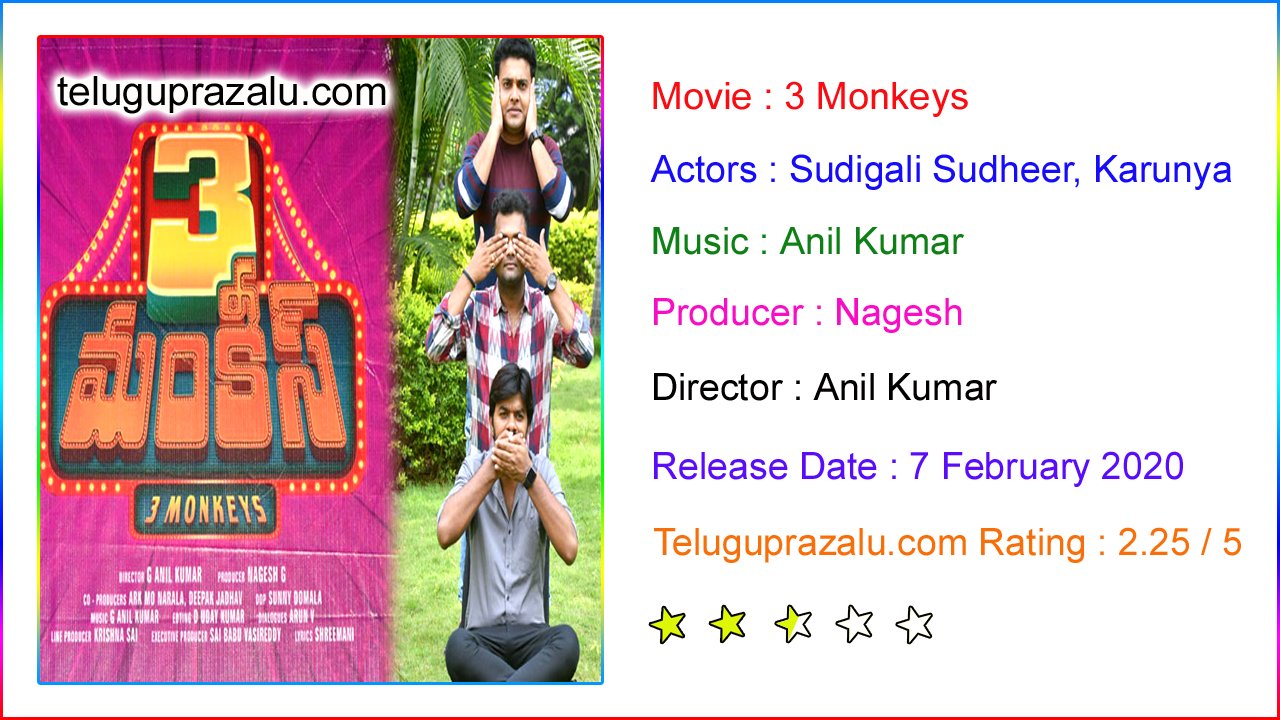 Starring Jabardasth comedians Ram Prasad, Sudheer and Srenu, Three Monkeys is a comedy caper that has hit the screens today. Let’s see how the film is.

Anand(Ram Prasad), Santosh(Sudigali Sudheer, and Phani(Getup Sreenu) are three happy go lucky bachelors who are not at all serious about their lives. The twist in the tale arises when they get into a massive problem. Things become even worse when this problem leads them into a murder case. The rest of the story is as to how these three friends come out of their problems safely.

All three Jabardasth actors are there in almost every scene and carry the film on their shoulders. Their punches work well in a few areas. But it was good to see them doing emotional roles in the latter part of the film which is pretty good. Each of them has their own modulation and gave their best.

A special song that is quite emotional and comes during the key scenes in the second half has been written and placed quite well. A small twist that changes the story on its head is also thought of well. The actor who did the role of a cop named Satru is quite impressive in his role. Karunya Chowdary was also good in her role.

The film is quite predictable in many areas. Except for a twist, the rest of the proceedings are quite ordinary. The director has narrated the film is a simple manner that does not create any impact on the proceedings. The story is also routine and quite weak. The climax of the film is not at all impressive and is ended in a rushed up manner.

Though the lead heroes have done well in the comic roles, the expected comedy from them is not showcased in the film. Because of the weak story, the actors also did not have much scope to perform. There are several repeated scenes in the film which could have been avoided.

The production values of the film are just about okay. Editing is pathetic but the BGM was passable. Camera work is strictly okay and so was the music. Coming to the director Anil Kumar, he has done a very ordinary job with the film. His story is old and so was his narration. The comedy showcased is not that funny and the emotional second half also does not work out well.

On the whole, Three Monkeys is yet another routine comedy caper that has strictly a few good moments. The audience who expects crazy comedy from this Jabardasth trio will be disappointed and the emotional second half is also not handled well making the film dull and boring watch this weekend.